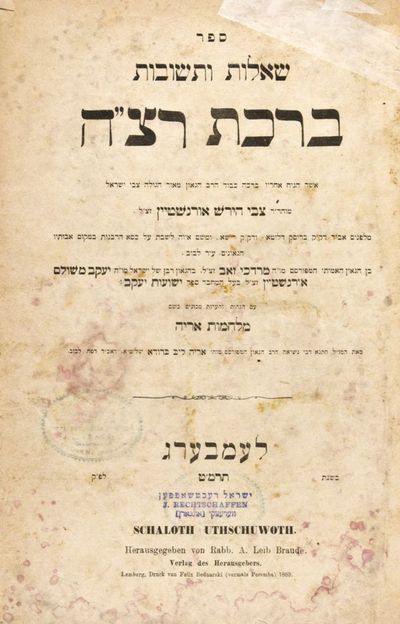 by Ornshtain, Tsevi Hirsh
Lemberg: Felix Bednarski, 1889. First edition. Hardcover. vg. Folio. 170 leaves. Rebound in imitation leather with embossed gilt lettering. Work of responsa on questions of Jewish Law. Written by renowned Jewish layman and Head of Religious Court, Tsevi [Tzvi] Hirsch Ornshtain. (see below) Very minor age wear to binding. Serious staining to title page, which is repaired at top, not affecting text. Title page has owners' stamp. Browning throughout, with sporadic foxing. In Hebrew. Very good condition. On the author (Source: Yossi Goldman): Tsevi Ornshtain, was the grandson of Rabbi Jacob M. Ornshtain, the author of Yeshuot Yaakov, an important 19th century work on Halacha [Jewish Law]. Like his grandfather, Tsevi Ornshtain held the position of Av- Bet Din [Head of Jewish Religious Court] in Lemberg. He was also a noted Halachist [scholar of Jewish Law]. However, unlike his grandfather, Tsevi treated the Maskilim [proponents of the Jewish Enlightenment] and progressives in a more tolerate manner. Tsevi supported the introduction of general education into the Cheder [Religious elementary school for boys]. He felt it would be better to organize religious schools rather than be compelled by the Austrian government to make changes to curriculum. This position met great resistance from the more traditional and Hasidic circles. After his death, his son-in-law Aryeh Leib Broda published a collection of his responsa called Birkat Retseh. Bet Eked, V.1,p. 179 item # 1690. (Inventory #: 13296)
$375.00 add to cart or Buy Direct from
Eric Chaim Kline Bookseller
Share this item