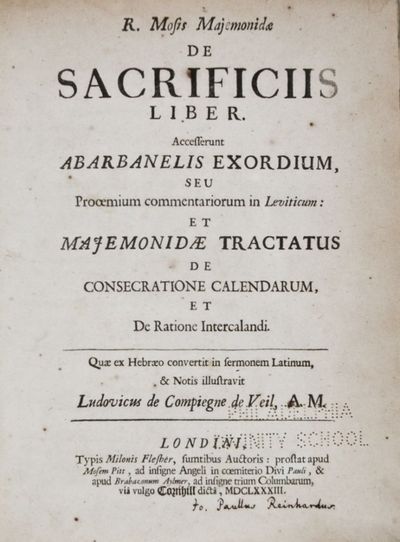 by Maimonides, Moses (R. Mosis Majemonide); Abarbanel, Isaac
London: Typis Milonis Flesher, sumptibus auctoris, prostat apud Mosem Pitt, & apud Brabazonum Aylmer, 1683. First edition. Hardcover. g. 8vo. (10) 450pp. 3/4 Vellum over marbled boards with brown lettering and library plate to spine. Age wearing throughout binding.Some tears, discoloration, scuffing and rubbing to boards and spine. Some browning and foxing to pages, not affecting the script. Welling to pages. Ex library. Library card pocket pasted to inside of front board. Perforation to title page: Philadelphia Divinity school. Inscribed by owner with pencil: "to Paullus Reinhardus." This first Latin translation contains texts from Moshe ben Maimon aka Rambam aka Maimonides (1135-1204) and Yitzchak ben Yehuda aka Abravanel Isaac Abrabanel(1437-1508). In Latin, with some writing in Hebrew. Cover in fair, book in good condition. [freely translated: Rabbi Moses Maimonides' volountary sacrifice: An approach to Abarbanel's introduction and commentary on Leviticus, and Maimonides' Tractate on the consecrated calendar and the rational calendar change] R. Moses Maimonides (Rambam) was a 12th century Jewish philosopher and halachic legal scholar. A highly controversial figure, both during his lifetime and after his death, but generally acknowledged as the preeminent Jewish thinker of the Middle Ages. He was born in Córdoba, Spain but fled as a child from the Almohad persecution. He eventually settled in Egypt where he served as a rabbi, physician and philosopher. His fourteen-volume Mishneh Torah, his only work not in Arabic, still carries canonical authority, particularly within the Yemenite Jewish community, as the codification of Talmudic law. His other work includes a commentary on the Mishnah entitled Kitab al-Siraj, Kitab al-Fara'I, a book on precepts, and the philosophical work Dalalat al-Ha'irin, known in Hebrew as the Moreh Nevukhim, The Guide to the Perplexed. The major premise is an attempted philosophical/theological reconciliation of the Hebrew Bible and Greek knowledge. This work came to play a central role in all subsequent major controversies over philosophy within the Jewish community during the Middle Ages. (Inventory #: 14061)
$1,250.00 add to cart or Buy Direct from
Eric Chaim Kline Bookseller
Share this item