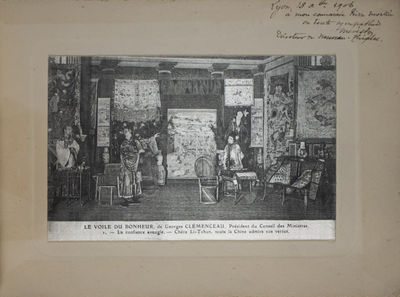 by Clemenceau, Georges (President du Conseil des Ministres)
Lyon: Societe Lyonnaise de Phototypie, 1906. Softcover. g+ to vg. Oblong octavo. 12 leaves. Original stapled gray wrappers. Inscription dated 1906 on first leaf above the mounted photographic card to "my comrade" (in French) and signed by the Director of the theatrical production. A wonderful pictorial documentation of the one act play "Le Voile du Bonheur" (The Veil of Happiness) by Georges Clemenceau. The play was premiered at the Renaissance Theater, Paris, November 4th 1901. The story features a blind man who recovers his sight, then discovers the ugliness of the world and eventually returns to blindness to be happy again. The Qing style Chinese-themed costume and set production was based on Clemenceau's enthusiasm for the culture. Although he had never been to China proper, the author's experience with the Chinese community in Singapore has been said to have been an influence. The play was not well received at the time and appears to have been the statesman and journalist's first and only attempt at writing for the stage. However, the show traveled to Italy in 1907 and back to Paris to the Théâtre de la Porte Saint-Martin in 1909. The drama was also adapted into a silent film by Albert Capellani and was released in France and America in 1910. Beautifully illustrated with 12 mounted annotated b/w photographic cards printed on silk. Discoloration and some creasing to wraps. Head of spine chipped. One inch of backstrip on tail of spine missing. Captions in French. Overall in good+ to very condition. Scarce. Georges Benjamin Clemenceau (28 September 1841 - 24 November 1929) was a French statesman who led the nation in the First World War. A leader of the Radical Party, he played a central role in politics during the Third Republic. Clemenceau served as the Prime Minister of France from 1906 to 1909, and again from 1917 to 1920. Besides Clemenceau's political achievements he was also a journalist, writer and collector, who devoted his passion to eastern culture and Asian art. No copies listed on OCLC. The first edition of "Le Voile du Bonheur" was printed in 1901 and is 63 pages long. Our version contains 12 photographs showing different scenes from the play. (Inventory #: 13400)
$650.00 add to cart or Buy Direct from
Eric Chaim Kline Bookseller
Share this item