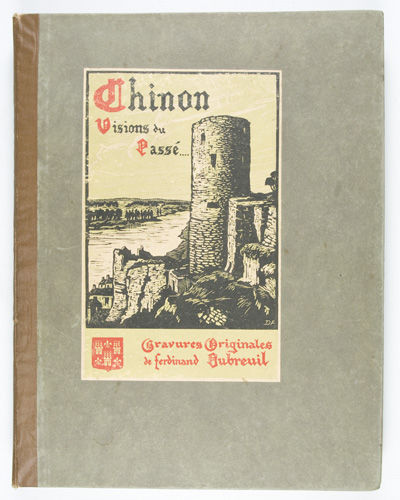 by Dubreuil, Ferdinand
Tours: Albert Arrault, 1935. Hardcover. vg. 4to. 1/5 signed copies. Unpaginated. Portfolio binding in half cloth over paper boards with paste-down illustration on cover, marbleized endpapers. The laid-in mats are of brown paper with black border, and description of gravure. Twenty-one matted original woodcuts, plus the 4 title pages of each section, main title page and example on the recto of presentation, and small illustrations in preface text. Twenty-five original woodcuts signed by Dubreuil. Preface is signed and has a separate inscription by Georges Berr to Louis Verneuil (May 14, 1893 - November 3, 1952) who was a French playwright, screenwriter, and actor. Born in Paris, Verneuil wrote approximately sixty plays and was best known for comedy. Many of his works were produced on Broadway including Jealousy (1928) which starred John Halliday and Fay Bainter; and Affairs of State (1950) which starred Celeste Holm and Harry Bannister. Affairs of State ran for 610 performances at the Music Box Theatre and was the first work Verneuil wrote in English. His screenwriting credits include Avec Le Sourire (With a Smile) (1936) which starred Maurice Chevalier, and Cosas de Mujer (Feminine Wiles) (1951). The Bette Davis film Deception (1946) was based on his play. Verneuil was once married to Lysiane Bernhardt, the granddaughter of Sarah Bernhardt. Verneuil committed suicide at the age of 59 by slashing his throat. Police found his body in a bathtub. Verneuil is buried in the Père Lachaise Cemetery. Limitation is signed by the presenter, Georges Collon. Fine. (Inventory #: 7606)
$650.00 add to cart or Buy Direct from
Eric Chaim Kline Bookseller
Share this item