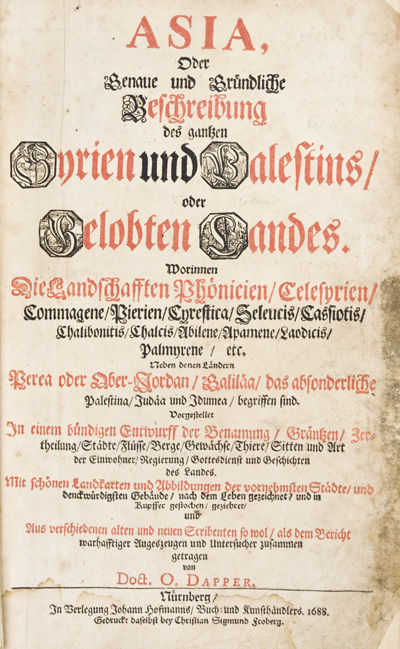 by Dapper, Olfert
Nurenberg: Johann Hofmann, 1688. Hardcover. poor. 4to. [1] 200 [4] + 400 [8] pp. Bound in leather with gold lettering on spine. Raised bands on spine. Illustrated with 38 (complete in 39) copper - engraved plates and maps. Double-paged 21, (of which 2 were are hand-colored.) Frontispiece and 8 full page plates, (of which one has extra folds.) Seven double-page copper - engraved maps, (3 of which have extra folds) In addition there are 34 in page text engravings, (4 of which are crudely hand-colored.) This is a copy of the German translation by Jacob von Meursen, who engraved the copperplates, which were compiled and modified from earlier printed works. Text in double column. The many illustrations are truly gorgeous, depicting: landscapes, architecture, desert scenes, religious and historical events and much more, making this a famous and well known work. Olfert Dapper (1635 - 1689) was a Dutch physician, writer and expert on Africa. He was born in Amsterdam around 1635. In May 1658, he enrolled at Utrecht University and two years later was signing himself "doctor medicinæ," although there is no evidence that he ever received any medical training. In 1663, he published a historical description of Amsterdam. In 1665 he published a Dutch translation of the works of Herodotus. With the increased interest in exploration and foreign cultures, a flourishing trade in travel books developed in Holland in the mid 17th Century. Following this trend, Dapper was just over thirty when he embarked on the geographic and ethnographic research that was to occupy him for the rest of his life. He threw himself into a vast undertaking, tackling first Africa (1668), then China (1670), Persia (1672) and the Middle East (1680). His books became well known in his own time, with translations rapidly appearing in English, French and German. In 1983 a museum devoted to him was opened in Paris, Musée Dapper. Dapper never went to the exotic destinations about which he wrote. Largely due to his utilization of the accounts of Jesuit missionaries and explorers, Dapper steered clear from making value judgments about the societies he described. He avoided ethnocentric connotations and became the first person to adopt an interdisciplinary approach, weaving together the separate threads of geography, economics, politics, medicine, social life and customs. Unlike some of his contemporaries, Dapper produced a genuine work for posterity, not just a compendium of exotic curiosities. Head and foot of spine missing, cracking to spine, front and rear boards detached but present. 1 full page plate missing. Browning, foxing and water staining throughout, but text and illustrations are mostly unaffected. Marginal pencil marks atop a number of the plates, not effecting illustrations. Some repairs with white binders tape on the verso of the double page fold out map of Terra Sancta, (The Holy Land) and to some of the double-page fold out plates. Exterior in poor, interior in overall fair condition. (Inventory #: 18960)
$2,500.00 add to cart or Buy Direct from
Eric Chaim Kline Bookseller
Share this item