Six letters to a pious man. With an introductory address to a Jesuit, and a supplementary one to a humbugger. Translated from the German, by an American lady 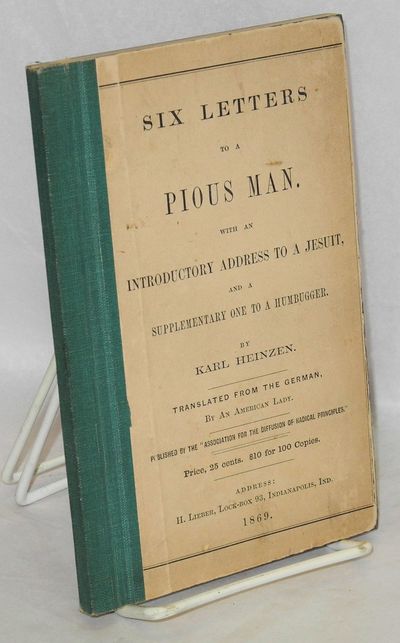 by Heinzen, Karl
Indianapolis, Ind: Association for the Diffusion of Radical Principles, 1869. Hardcover. 65p., rebound neatly in cloth-backed boards with front and rear wraps laid down expertly on the covers, clean library book plate on inside of front cover. Karl Peter Heinzen, 1809-1880, a German-born journalist and revolutionary writer, arrived in America mid-century, where he founded several radical, but short-lived papers. Abolition was one cause he could successfully espouse, but many others advocated by him while serving as editor of the German-language Pionier seldom gained much following. He disavowed both institutionalized Christianity and any centralized government. Albert Faust said of Heinzen in his DAB article: "A born satirist, he spared neither friend nor foe; opposition he could not tolerate; the value of tact and cooperation he never learned. A courageous seeker after truth, he could not compromise with truth as others saw it. The most intellectual of all the German revolutionists, he never mastered the English language and his works with very few exceptions became known to only a limited few. (Inventory #: 5618)
$45.00 add to cart or Buy Direct from Bolerium Books
Share this item