A Collection of Modern Entries: Or, Select Pleadings in the Courts.. 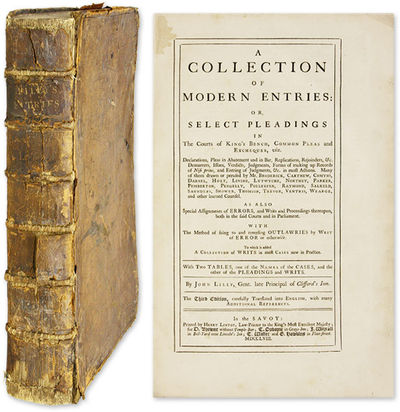 by Lilly, John
1758. London, 1758. 3d ed.. London, 1758. 3d ed. Lilly's Modern Entries Lilly, John [fl. c.1740]. A Collection of Modern Entries: Or, Select Pleadings in the Courts of King's Bench, Common Pleas, and Exchequer: Viz. Declarations, Pleas in Abatement and in Bar, Replications, Rejoinders, &c., Demurrers, Issues, Verdicts, Judgments, Forms of Making up Records of Nisi Prius, and Entering Judgments, &c., In Most Actions. Many of Them Drawn or Perused by Mr. Broderick, Carthew, Comyns, Darnel, Holt, Levinz, Lutwyche, Northey, Parker, Pemberton, Pengelly, Pollexfen, Raymond, Salkeld, Saunders, Shower, Thomson, Trevor, Ventris, Wearge, And Other Learned Counsel. As Also Special Assignments of Errors, And Writs and Proceedings Thereupon, Both in the Said Courts and in Parliament. With the Methods of Suing to and Reversing Outlawries by Writ of Error or Otherwise. To Which is Added a Collection of Writs in Most Cases Now in Practice. With Two Tables, One of the Names of the Cases, And the Other of the Pleadings and Writs. [London]: Printed by Henry Lintot, 1758. [viii], 676, [3] pp. Folio (14" x 9"). Contemporary calf, blind frames to boards, raised bands and lettering piece to spine. Worn and scuffed, cords showing through spine, boards beginning to separate, corners bumped, pastedowns loose, a few cracks to text block. Light browning, mostly to margins, and faint dampspotting in a few places, internally clean. $200. * "Third," actually second, edition. Holdsworth discusses this work at length in his chapter on eighteenth century legal literature. First published in 1732 and a standard work for decades, it contains pleadings arranged alphabetically, entries on the rolls of the court and precedents of writs original and judicial. Holdsworth, A History of English Law XII:358. English Short-Title Catalogue N5679. (Inventory #: 56090)
$200.00 add to cart or Buy Direct from
Lawbook Exchange
Share this item

Reports of Cases Adjudged in the Court of King's Bench, Since the..

1766
(click for more details about Reports of Cases Adjudged in the Court of King's Bench, Since the..)
View all from this seller>