The East-Haven Register In Three Parts 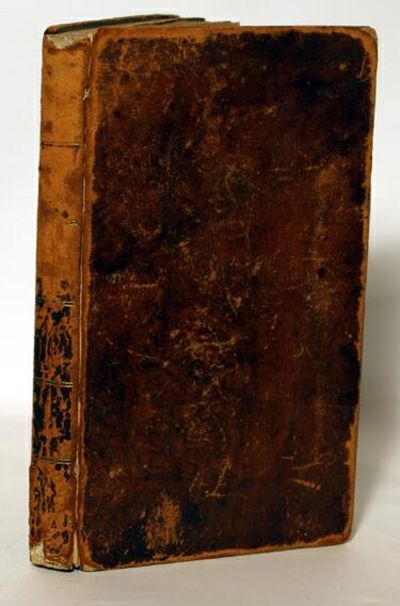 by Dodd, Stephen
New Haven: A. H. Maltby & Co., 1824. First Edition. First printing Fair to good in full leather covered boards with the front joint broken but the front joint and text block reasonably strong and in place. The majority of the text block shows dampness staining across the upper 2/3rds of most of the pages yet the printing on each page remains easily read. There are two early prior owner's names in ink on the first free end page. A 12mo measuring 7 1/8" tall by 4 1/8" deep containing 200 pages of text. The information contained in the parts of the book include: Part I. Containing a history of the town of East-Haven, from its first settlement in 1644, the year 1800. Also, an account of its boundaries, iron-works and mills, division of lands, controversies with New-Haven, and Branford, town charters, ecclesiastisal affairs, schools, population and taxes, losses by war, natural history and curiosities, roads and public lands. Part II. Containing an account of the names, marriages, and births, of the families which first settled , or which have resided in East-Haven, form its settlement in 1644, to the year 1800. Part III. Containing an account of the deaths in the families names in the second part, from the year 1647 to the end of the year 1823. Considered by Howes to be "mildly scarce" and Sabin calls it "An extremely rare local history." (Howes D-387; Sabin 20485; Armstrong: Connecticut A Bibliography of its History; 3321) (Inventory #: TB22311)
$200.00 add to cart Available from
Town's End Books
Share this item