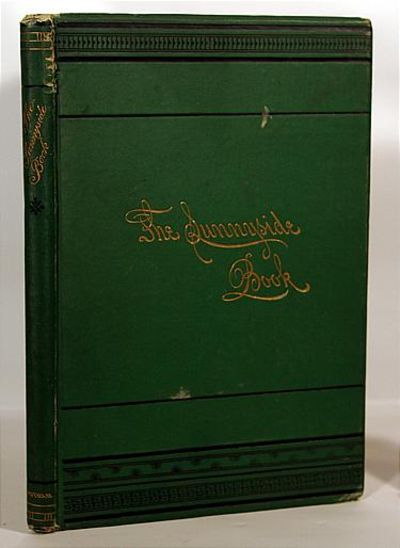 by [Washington Irving] Various Authors
New York: G. P. Putnam & Sons, 1871. Good in the publisher's original green cloth over beveled boards with gilt text and black decorations on the spine and the same on the front board with brown clay end sheets. The cloth at the upper front joint is worn and rubbed through and the front and rear hinges have been repaired. Nonetheless, the binding remains tight and strong with no loose or weak signatures. The cloth at the head and heel of the spine is rubbed through as it is in several areas at the lower edge of the boards. Without a dust jacket, probably as issued. 133 pages of text with 47 illustrations by various artists including: Wm. Hart, Hows, Darley, Nast, Casilear, Smillie, Shattuck, McEntee, Bellows and Huntington and with a frontispiece by H. B. Hall. A collection of seventeen short stories by William Cullen Bryant, Washington Irving, W. D. Howells, William Allen Butler, T. Buchanan Read, Howard Glyndon, Bayard Taylor, W. D. O'Connor, R. H. Stoddard, George William Curtis, (BAL, 10387 Irving, 2236 Butler, 16471 Read and 1721 Bryant) An anthology named after Washington Irving's home. (Inventory #: TB22734)
$50.00 add to cart Available from
Town's End Books
Share this item

Franklin Center : The Franklin Library , 1977
(click for more details about The Federalist)
View all from this seller>