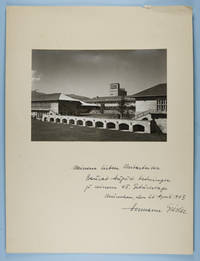 by Giesler, Hermann; Hugo Schmölz
NP, n/d. Softcover. vg. Portfolio. 18 original silver prints mounted on heavy card stock resting in tan cloth clamshell box. Photos are by Hugo Schmölz, one of the main architectural photographers of the Third Reich. 10 of them show the exterior and interior of the N. S. Ordensburg Sonthofen, the other 8 are of buildings nearby such as the post office and Generalhalle (generals hall). Inscribed below one of the photos "Meinem lieben Mitarbeiter Baurat August Kröninger zu seinem 45. Geburtstage, München, den 26. April 1943, Hermann Giesler." Giesler was the architect of the Ordensburg. Minor staining to box, interior of box is lined with textured silk, fore-edge flap as issued designed to remove plates in a safe efficient manner. Minor staining to box, two-inch closed tear to card stock on one plate not affecting image. Overall very good condition. Together with: "Die Kunst im dritten Reich." 3. Jahrgang / Folge 1, Ausgabe B, Januar 1939. Folio. 44,viii,pp. Illustrated wraps. Most of backstrip torn but still holding. Two by one inch piece on back wrapper missing. Among many articles this issue contains a subsection by Hermann Giesler on the Sonthofen Ordensburg as well as other projects he worked on. Illustrated with reproductions of b/w photos as well as one color photograph of the Ordensburg. Architectural plans by Gieser of 'Die hohe Schule am Chiemsee', 'Haus Elephant' in Weimar, and 'Die Bauten am Adolf Hitler Platz' also in Weimar "in rear of book. Kunst im dritten Reich" was the most important magazine on architecture and art in the Third Reich. Wraps in good-, interior in very good condition. Together with: 24 page booklet "N.S. Ordensburg. 4to. Illustrated wrappers. Minor creasing and staining to wraps. Last 6 pages loose but present. Frontispiece portrait of Hitler. Introduction by Dr. Robert Ley. Foreword by Alwin Seifert. Illustrated with reproductions of b/w photographs of the Ordensburg. Good condition. Together with: Der Weg der Ordensburg. Berlin. ND. Verlag der deutschen Arbeitsfront. Elephant folio. Unpaginated. Original illustrated wrappers. This work was a "Sonderdruck" (Special edition) not sold to the general public. Profusely illustrated with reproductions of b/w photographs. Many of the photos were taken by Hitler's personal photographer, Heinrich Hoffmann. "Sonderdruck des Reichsorganisationsleiters der NSDAP für das Führerkorps der Partei, ihrer Gliederungen und der angeschlossenen Verbände." Text in Gothic. Good condition. Rare. "Ordensburg(en)" were special schools to "prepare" and train future Nazi leaders. Applicants were put through a rigorous test in order to be accepted and of course had to prove that they were of "pure German blood and Aryan descent." They had to be aged between 25 and 30 years old, belong to either the Nazi Party, the Hitler Youth, SA or SS. The schools themselves were typically stark, modern structures with basic utilities and ample room for the young men training to go to war. (Inventory #: 19849)
$5,750.00 add to cart or Buy Direct from
Eric Chaim Kline Bookseller
Share this item