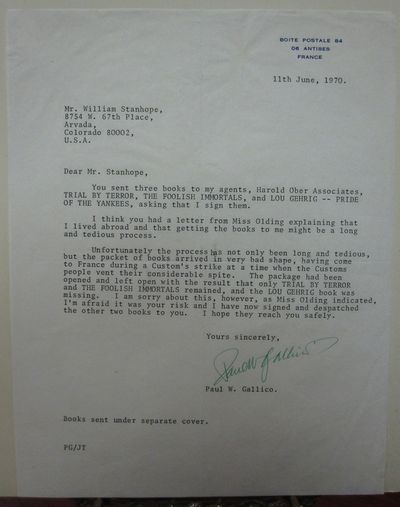 by GALLICO, Paul (1897 - 1976)
Antibes, France, 1970. unbound. 1 page, 10.5 x 8 inches, Antibes, France, June 11, 1970. In this letter, Gallico is expressing his displeasure for having received a damaged parcel of books sent to him while abroad, and which was supposed to include an edition of his Lou Gehrig book, in part: "...the packet of books arrived in very bad shape, having come to France during a custom's strike...and at a time when the Custom's people vent their considerable spite...The package had been opened, and the Lou Gehrig book was missing..." Two faint folds; near fine condition. American novelist and sports writer; author of "Lou Gehrig, Pride of the Yankees." (Inventory #: 214363)
$100.00 add to cart or Buy Direct from
Argosy Book Store
Share this item