LAWS OF THE TERRITORY OF KANSAS, PASSED AT THE SECOND SESSION OF THE GENERAL LEGISLATIVE ASSEMBLY. BEGUN AND HELD AT THE CITY OF LECOMPTON, ON THE SECOND MONDAY (12TH) OF JANUARY, A.D. 1857 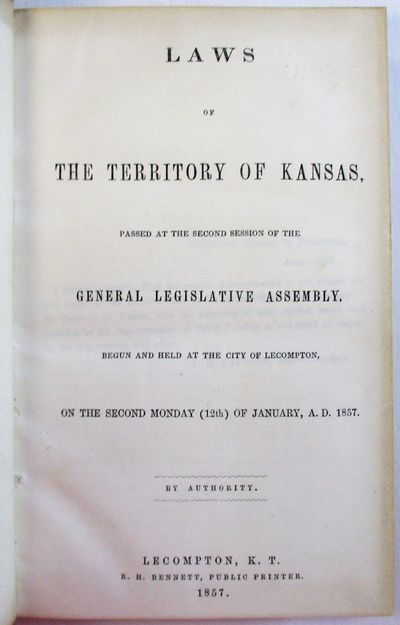 Responding to the great political and social unrest in Kansas, this very early Territorial Legislature establishes procedures for taking a Census in order to elect delegates to Kansas's constitutional convention.
The escalating violence over slavery and incursions of Missouri guerrillas prompt passage of a law punishing by death those who "combine by force to usurp the government of this territory, or to interfere forcibly with the administration of the government," or "to levy war against any part of the people of this territory," or "to remove forcibly out of this territory any portion of the people of this territory." The Legislature also passes a long, detailed bill on the regulation of Railroads; regulates brands and marks; establishes common schools; and enacts a variety of other laws, including the organization of counties; incorporations of hotels, mining companies, water power companies, bridge and ferry companies, toll roads and railroads, towns and cities, etc. A detailed Index is included
FIRST EDITION. I Harv. Law Cat. 1077. AII Kansas 117. 137 Eberstadt 339. (Inventory #: 26055)
$500.00 add to cart or Buy Direct from
David M. Lesser, Fine Antiquarian
Share this item
David M. Lesser, Fine Antiquarian Books LLC
Offered by