THREE FUNERAL SERMONS PREACH'D AT CAMBRIDGE, UPON THE DEATH OF THE REVEREND & LEARNED, MR. JOHN LEVERETT, LATE PRESIDENT OF HARVARD-COLLEGE 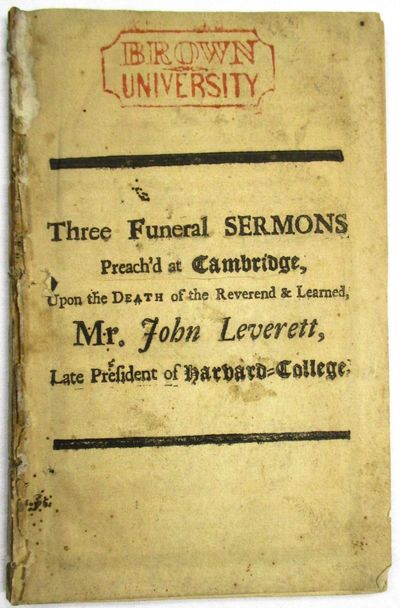 A very scarce, early American imprint. NAIP, recording only five locations, corrects Evans's cataloguing of the three sermons as separate imprints. They include Benjamin Wadsworth's 'Surviving Servants of God...'; Benjamin Colman's 'The Master Taken Up From the Sons of the Prophets'; and Nathanael Appleton's 'A Great Man Falleth in Israel.' NAIP says they were "Not issued separately." Church could "find no record of all three bound together, except possibly the copy in the Massachusetts Historical Society's Library." Leverett was Harvard's first secular president; he served from 1708 until his 1724 death.
Church 896. NAIP w028094 [5]. Evans 2500, 2514, 2591. (Inventory #: 26170)
$850.00 add to cart or Buy Direct from
David M. Lesser, Fine Antiquarian
Share this item
David M. Lesser, Fine Antiquarian Books LLC
Offered by