A NARRATIVE OF THE PROCEEDINGS OF THE RELIGIOUS SOCIETY OF THE PEOPLE CALLED QUAKERS, IN PHILADELPHIA, AGAINST JOHN EVANS. TO WHICH IS ADDED: A REPORT OF THE EVIDENCE DELIVERED ON THE TRIAL OF THE CASE OF JOHN EVANS, VERSUS ELLIS YARNALL AND OTHERS: WITH AN APPENDIX, COMPILED UNDER THE DIRECTION OF JOHN EVANS 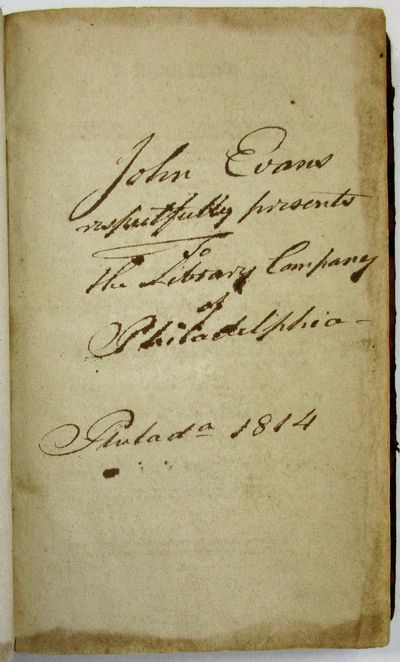 Evans presents the facts of the suit against the Overseers of the Society of Friends. His preface exposes the attacks on his good name "resulting from the wanton exercise of uncontrouled ecclesiastical power!" Evans had been a trustee of the bankrupt estate of John Field, who complained of Evans's conduct to the Overseers of the Meeting. The court case and ecclesiastical proceedings, as well as the arbitrary behavior of the Overseers, are reviewed in overwhelming detail.
The rear endpaper is filled with a holograph signed, and entirely written in ink, by Evans which reads:
"N.B. The subscriber considers the testimony of the active members of the religious Society of the Quakers unjust, their only informing such parts of the testimony as suited for their purposes, a shameful violation of their qualification, as they should have informed the whole truth.
"Their treatment in carrying the case before the Preparative meeting, previous to their visiting the party, by their rulers (overseers) & the business of laying before the monthly & preparative meetings, at one and the same time is contrary to their discipline, the secrecy with which it was conducted and information being withheld from the congregation thru the influence of the overseers, & the accused not admitted to be present to vindicate his conduct, is entirely an inquisition unprecedented in the United States except in Quaker Society.
"The narrative does in some measure (tho not fully) elucidate the subject to which it refers.
"Soon after the publication of the narrative R. Love of the monthly meeting committee failed in paying his just debts. Since that time J.J. one of the Preparative meeting committee, also made a shameful failure, both of which were to a very large amount & which are serious losses to both their creditors.
"Thus have two of the active members of the Quaker Society, been stopped in their career of persecution of the fellow citizens." [Signed] "John Evans."
Sabin 23168. AI 22786. Cohen 11972. (Inventory #: 26115)
$500.00 add to cart or Buy Direct from
David M. Lesser, Fine Antiquarian
Share this item
David M. Lesser, Fine Antiquarian Books LLC
Offered by