MR. FILLMORE'S SPEECH, DELIVERED AT ALBANY. WHAT HE THINKS OF THE REPUBLICANS 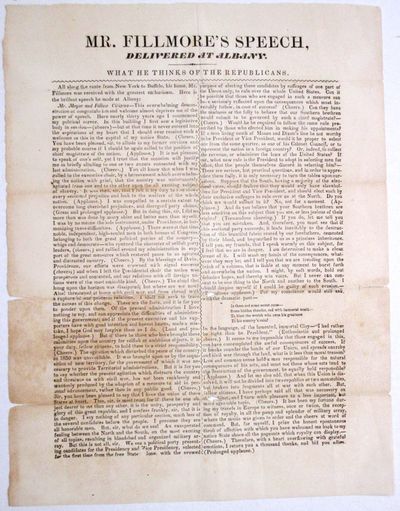 A rare imprint of former President Fillmore's speech as the 1856 presidential candidate of the American or Know-Nothing Party, founded to counter the allegedly excessive influence of Roman Catholics in American life. Fillmore presented the Party as the only alternative to the Republicans' plans to disrupt the Union and the Democrats' program to spread slavery throughout the land. The Republicans, he warns, have "the avowed purpose of electing candidates by suffrages of one part of the Union only, to rule over the whole United States. Can they have the madness or the folly to believe that our Southern brethren would submit to be governed by such a chief magistrate?"
Republican success would "break asunder the bonds of our Union, and spread anarchy and civil war through the land."
Not located on OCLC, as of April 2020; or in Sabin, Eberstadt, Decker, NUC; or online catalogues of AAS, Library of Congress, Princeton, U Chicago, U MI, U TX, Columbia, U CA, Yale, Harvard, Newberry Library, NY Public Library, Huntington Library. (Inventory #: 26240)
$2,000.00 add to cart or Buy Direct from
David M. Lesser, Fine Antiquarian
Share this item
David M. Lesser, Fine Antiquarian Books LLC
Offered by