The Letters of Thomas Gainsborough 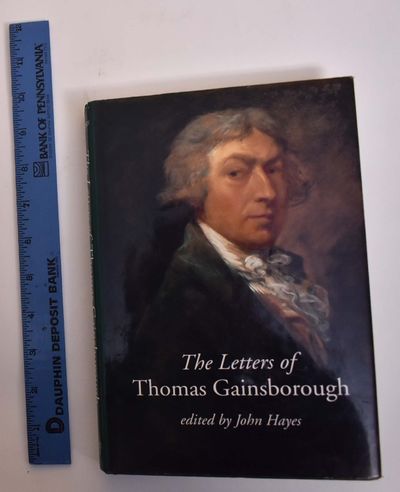 by Hayes, John (editor)
New Haven, Connecticut: Yale University Press, 2001. Hardcover. VG- (Some rubbing to dj.; Sticker on front of dj.; Internally clean and tight). Green cloth over boards with gilt lettering on spine; Color illus. dj.; xxx, 209 pp.; Profusely illustrated in black and white. :"Once described as 'brilliant but eccentric ... too licentious to be published, ' Gainsborough's letters delighted his friends and they delight us. This book gathers together all the known letters by the illustrious eighteenth-century British painter and connects them with a narrative of Gainsborough's life that gives the correspondence a biographical coherence." "The letters reveal a man who was generous and warm-hearted, devoted to his family and friends, convivial, often dissipated yet modest and God-fearing, usually sensible in his own affairs and always so in the advice he gave to others. We also learn a great deal about Gainsborough's painting: his methods and techniques, his attitude toward portraiture and landscape, his relationships with his patrons, the prices he charged, his concern about how his pictures were hung, and his ambivalence about the value of the Royal Academy exhibitions. Running through the letters, too, is his love of music and his friendship with musicians." "The 110 letters, which include correspondence with Gainsborough's friends and relative, are supplemented by 37 documents in the artist's own hand, chiefly instructions to his bankers and receipts for payments from clients. Illustrations are included of all the people to whom Gainsborough wrote whose portraits exist and of friends and works of art described in the letters."--Jacket. (Inventory #: 117279)
$35.00 add to cart or Buy Direct from Mullen Books
Share this item