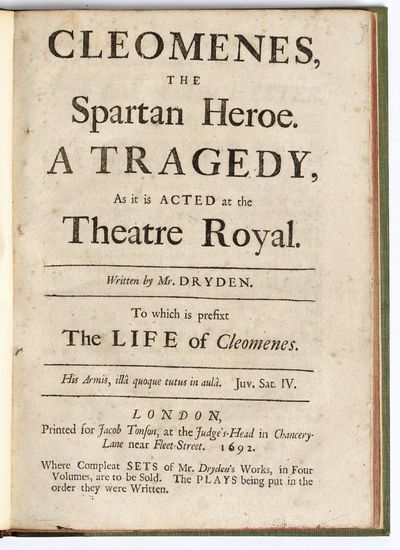 It is believed that the revival of Shakespeare's Roman plays caused Dryden to write this play. It is said that Southern wrote the last act.

The scene is Alexandria. Cassandra falls in love with Cleomenes, and in the absence of Ptolemy confesses her passion, to which Cleomenes does not respond. He is thereupon imprisoned and nearly starved. He and Cleanthes incite the Alexandrians to revolt, but the attempt fails, and Cleanthes and Cleomenes kill one another.

"The additions which Dryden has made to the real story are chiefly the scene in which the Spartans are nearly starved, the love of Cassandra for Cleomenes, the whole character of Cleora, and nearly the whole of Cleanthes" (Genest). In his preface to the play as printed, Dryden wrote: "Mrs. Barry has in this tragedy excelled herself, and gained a reputation beyond any woman whom I have ever seen in the theatre."
It is believed that the revival of Shakespeare's Roman plays caused Dryden to write this play. It is said that Southern wrote the last act. (Inventory #: 0281)
$800.00 add to cart Available from Golden Legend
Share this item
Golden Legend, Inc.
Offered by