Use of intracerebral electrodes to evaluate drugs that act on the central nervous system [in] Annals of the New York Academy of Sciences, volume 64, art. 4: Experimental methods for the evaluation of drugs in various disease states 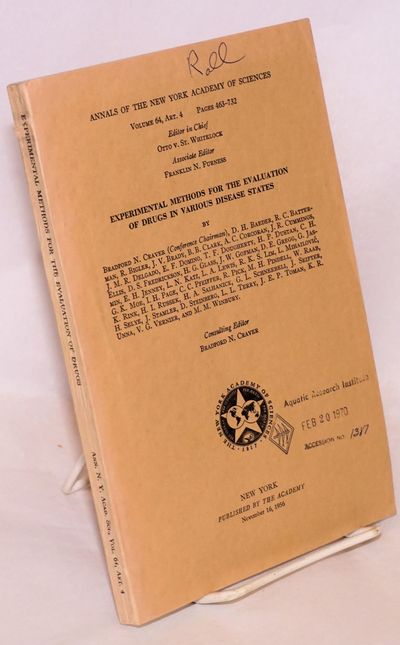 by Delgado, Jose M. R., and Ljubodrag Mihailovic
New York: The Academy, 1956. Pp.644-666 [of 463-731], glossy paperstock throughout, illustrated mostly with tables. Plain printed journal wraps, one accession stamp and a former owner's personal name on the cover. Slight signs of handling. Annals volume 64, art. 4. Translating from the medico-baffle-language, this paper seems largely to do with induced seizures in cats and monkeys, applying electricity and various chemicals, and recording the results via Delgado's special implants. LSD was used and appears on tables opposite numerical results, but is not discussed in the text. Nor is the familiar acronym used. A quote from the summation, p.664 : "Direct exploration of the brain of unanesthetized animals before and after administratin of drugs may give information about their selective pharmacological action upon cerebral structures." Note the "un" in unanesthetized. "The following substances have been studied: 14 per cent CO2, 10 per cent O2, atropine, diphenylhydantoin, phenobarbital, trimethadione, chlorpormazine, reserpine, lysergic acid diethylamide, and tubocurarine." No photographs of subject animals. Another article in this collection also derives from monkey experimentation, where brainstem lesions were induced, producing parkinsonian effects. (Inventory #: 92374)
$35.00 add to cart or Buy Direct from Bolerium Books
Share this item