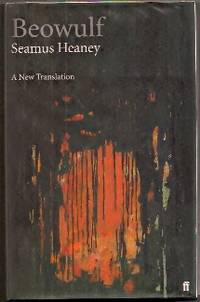 by Heaney, Seamus
London: Faber & Faber, 1999. First edition. Hardcover. A fine copy in a fine dust jacket. Winner of the Whitbread Book of the Year. A new translation of an Old English heroic epic poem of unknown authorship, dating as recorded in the Nowell Codex manuscript from between the 8th and the early 11th century, set in Denmark and Sweden. Commonly cited as one of the most important works of Anglo-Saxon literature and has been the subject of much scholarly study, theory, speculation, discourse, and, at 3182 lines, has been noted for its length. In the poem, Beowulf, a hero of the Geats, battles three antagonists; Grendel, who has been attacking the resident warriors of a mead hall called Heorot in Denmark; Grendel's mother, and an unnamed dragon. The last battle takes place later in life, after returning to Geatland (modern Southern Sweden), where Beowulf has become king. In the final battle, Beowulf is fatally wounded, and, after his death, his retainers bury him in a tumulus in Geatland. (Inventory #: ESB11334)
$100.00 add to cart or Buy Direct from Ed Smith Books
Share this item

New York : Random House , 1939
(click for more details about THE DAY OF THE LOCUST)

London : Jonathan Cape , 1966
(click for more details about LEE STRASBERG AT THE ACTOR'S STUDIO. Tape-Recorded Sessions, edited by Robert H. Hethmon. Illustrated from photographs)
View all from this seller>