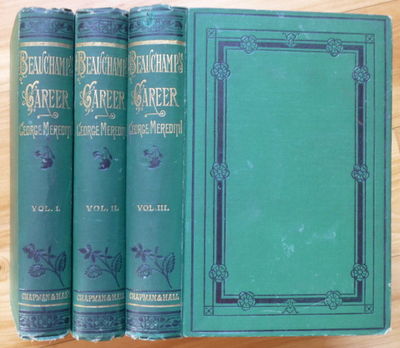 by Meredith, George
1876. In Three Volumes. London: Chapman and Hall, 1876. Original green cloth decorated in black. First Edition of this novel, published actually in November 1875, near the end of its serialization (August 1874 - December 1875) in The Fortnightly Review. BEAUCHAMP is the first, and greatest, of his [Meredith's] less deeply personal books... It is political. It dabbles with ideology. It has much to say -- and nearly all of it severely critical -- of the condition of England in the middle 1870s... It is a strange, absorbing book, one that makes demands on the reader... It is lyrical, oracular, subtle in its shifting point of view, and funny too... BEAUCHAMP preserves its greatness as a political novel for the main reason that it is the expression of a paradox. It promotes no cause. It isn't Tory. It isn't radical. It floats the notion, everywhere now gaining support, that small is beautiful. [Williams] This is an unusually clean, near-fine copy, with very little wear (a few faint cover marks, one small hole near the top of one spine) -- quite remarkable for a three-decker novel, as most copies (but not this one) went straight to the lending libraries where they would be plastered with labels and then rented out. Meredith's two last novels, from the 1890s when the libraries were dying out, do frequently turn up in this condition -- but not the earlier ones, such as BEAUCHAMP'S CAREER. Collie IX; Sadleir 1688 (and pp 380-381, where he ranks this novel eighth in scarcity among Meredith's fifteen works of fiction). Loosely inserted is the 1948 customs declaration when the most-recent owner of this set bought it from Myers & Co. of New Bond Street. (Inventory #: 11321)
$1,150.00 add to cart or Buy Direct from
Sumner & Stillman
Share this item