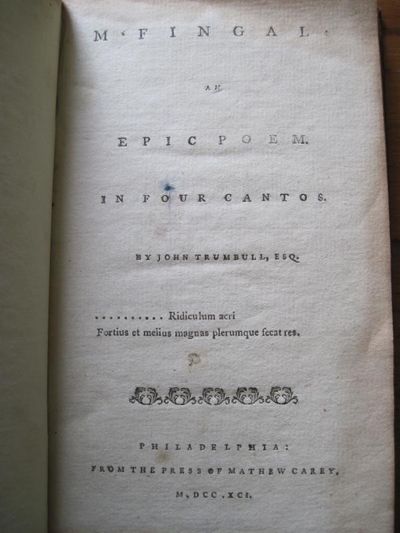 by TRUMBULL, John
TRUMBULL, John. M'FINGAL: AN EPIC POEM IN FOUR CANTOS. Philadelphia: Mathew Carey, 1791. 8vo. Contemporary marbled calf. 95, (1) pages. [Evans, 23841.] John Trumbull was a poet and jurist from Connecticut who graduated from Yale. The first canto of M'Fingal was published in 1775. At the conclusion of the war, Trumbull arranged his poem, and added the additional cantos. This pro-Whig poem (a mock epic) is a comprehensive review of the actions of the British leaders throughout the Revolution. M'Fingal was accepted after the war as an important contribution to belles-lettres. Reprinted more than 30 times between 1782 and 1840, it was the most popular American poem of its length. Both Washington and Jefferson received copies from the author which still exist today, and Jefferson kept a copy in his last library which was sold after his death in 1829. Endpapers browned, joints rubbed, stamped name on front endpaper of early owner, "Ephraim Hinds," covers restored; text good. (Inventory #: 9464)
$185.00 add to cart Available from Bookpress
Share this item