THE PURPLE LAND THAT ENGLAND LOST. TRAVELS AND ADVENTURES IN THE BANDA ORIENTAL, SOUTH AMERICA 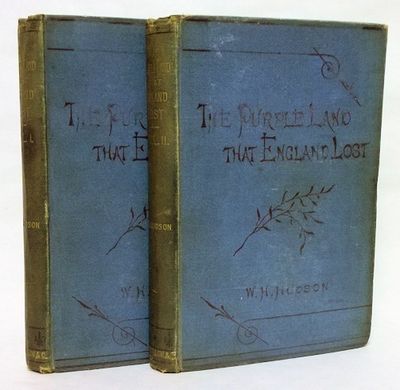 by Hudson, W. H.
London: Sampson Low [et al], 1885. Two volumes. Gray-blue cloth, stamped in red and gilt. Some rubbing and modest soiling and marking to the cloth, some shallow fraying to tips and spine ends, inner hinges cracking slightly, spines a bit darkened, some old red smudges to endsheets, but generally a good to near very good set of a book difficult in truly fine condition. Slipcase. First edition of the author's first book, in the primary binding ("both varieties are extremely scarce" - Carter). The 32pp. catalogue in the second volume is dated October 1885. Although the exact number of copies printed is not recorded, the edition was relatively small, and sales slow, resulting in a likely slightly later, more economical publisher's binding variant, and a single volume remainder "Cheap edition" comprised of the original sheets issued in 1887. Hudson himself noted in 1902 that "A small edition was published, which did not sell -- except as waste paper, or as a remainder. Now it cannot be had." PAYNE A1a. CARTER, MORE BINDING VARIANTS, pp.10-11. (Inventory #: WRCLIT62038)
$2,500.00 add to cart or Buy Direct from
William Reese Co. - Literature
Share this item