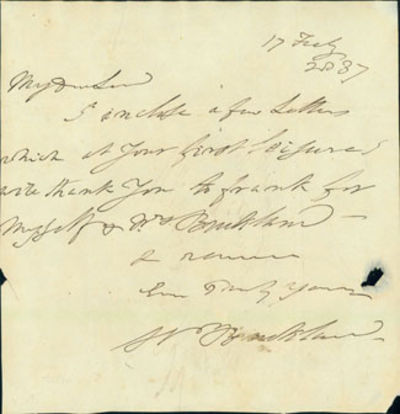 by Buckland, William
1837. 1 page, plus address on verso. 181 x 176 mm. Small hole where seal was broken, otherwise fine.Autograph note signed from geologist and paleontologist William Buckland, author of Reliquiae Diluvianae (1823) and the first professor of geology at Oxford University, to his former student William Willoughby Cole (1807-86), known by his courtesty title of Viscount Cole until 1840, when he assumed the title of third Earl of Enniskillen. Cole, an enthusiastic amateur geologist and paleontologist, amassed one of the world's largest collections of fossil fishes, which is now at the British Museum. He served as an M.P. in the House of Commons from 1831 until his elevation to the peerage. Buckland's note reads "I inclose a few letters which at your first leisure I will thank you to frank for myself and Mrs. Buckland." As a Member of Parliament Cole enjoyed franking privileges (free postage), which he would have routinely extended to all of his friends and colleagues as was customary at the time. Buckland would have appreciated this service, since postage in England was expensive prior to the introduction of the Penny Post in 1840. . (Inventory #: 40819)
$750.00 add to cart or Buy Direct from
Jeremy Norman & Co.
Share this item
Jeremy Norman & Co., Inc.
Offered by