THE ADVENTURES OF GIL BLAS OF SANTILLANA 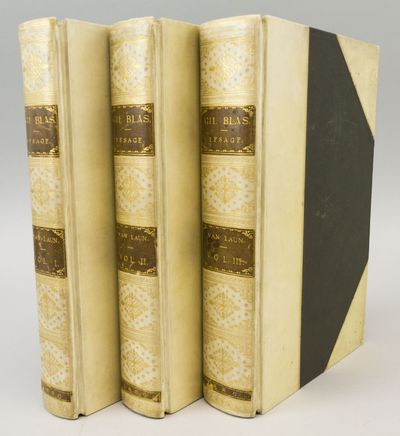 by LE SAGE, ALAIN RENÉ
Edinburgh: William Paterson, 1886. 248 x 165 mm. (9 3/4 x 6 1/2"). Three volumes. Translated by Henri Van Laun, with an introduction, notes, and a life of the author. Quite pleasing three-quarter vellum over sturdy textured cloth boards by Tout (stamp-signed on verso of front free endpaper), flat spines heavily gilt in compartments in antique style featuring large and intricate central fleuron, three brown morocco labels on each spine, marbled end papers, top edges gilt. Title vignettes and 21 fine etched plates (including frontispiece portrait in first volume) by Adolphe Lalauze. Large, attractive engraved bookplate of Hilda Leyel signed "A M H 1940" in each volume. Top corners of volume I slightly bumped, turn-ins a little spotted (trivial spots and superficial marks elsewhere to covers and spines, particularly to the labels), otherwise an excellent set, with no significant wear, and with the gilt still bright and attractive. Slight offsetting from plates, but very fine internally. This is a finely bound, well printed, and attractively illustrated edition of Le Sage's great satirical picaresque romance, which appeared originally in 1715-35. The very appealing plates here are characterized by rich and charming details of personal adornment, household furnishings, and objects from everyday life, and the interiors especially have a design, depth, and realism that are impressive. Lalauze (1838-1906) was a major figure in what Ray describes as a revival of etching as an art form in France. This revival was partly stimulated by the founding of an etcher's society, and the renewed interest in etching was carried into book illustration by a number of publishers who specialized in luxury editions. Executed by a first-rate binder, our set in elaborately gilt vellum with morocco labels is unusual in design and at the same time unusually pleasing. Previous owner Hilda Leyel (1880-1957) was a noted herbalist and devoted student of Nicholas Culpeper's 17th century work on medicinal plants, which she used as a source for her book, "The Magic of Herbs," published in 1926. (Inventory #: ST11462a-132)
$572.00 add to cart or Buy Direct from
Phillip J. Pirages Fine Books
Share this item