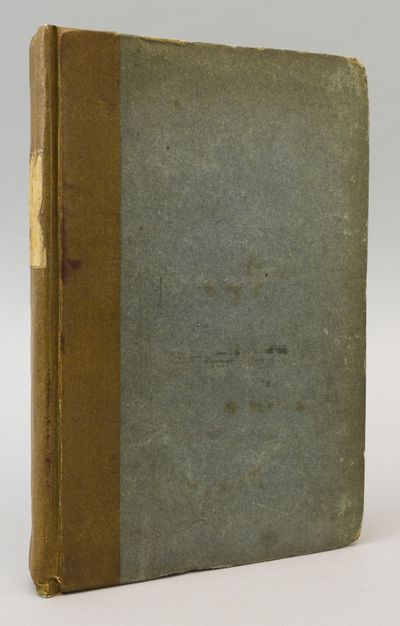 by MALTHUS, THOMAS ROBERT
London: John Murray, 1817. FIRST EDITION. 229 x 152 mm. (9 x 6"). 2 p.l., 327, [1] pp. ORIGINAL BLUE PAPER BOARDS, neatly rebacked in buff paper, original printed paper spine label, UNTRIMMED EDGES. 19th century bookplate. Goldsmith 21762; Kress B.6973; Palgrave II, 676. Spine label chipped and rubbed, with significant loss of legibility, a little soil and wear to original sides (as expected), but the boards surprisingly well preserved, and the well-restored binding absolutely tight. First few leaves and last three gatherings freckled with foxing, minor foxing elsewhere, a few trivial spots, but excellent internally, still rather fresh and not at all darkened or browned. An Essay on the Principle of Population, the great work of Malthus (1766-1834), was first published in 1798. Its main thesis held that while population increases in a geometric ratio, the means of subsistence only increase arithmetically, with the inevitable result that the expanding population will eventually outstrip the means of livelihood and leave millions facing deprivation (unless war or disease eliminates them first). Malthus later softened some of his harshest predictions, and the prosperity of the 19th century in Britain tended to discredit his work, but we are forever in his debt for "having called public attention in a striking and impressive way to a subject which had neither theoretically nor practically been sufficiently considered." (Britannica) The additions in the present volume constitute the author's final revisions to a text that was altered in each of the six editions through which it passed in Malthus' lifetime. (Inventory #: ST4866)
$593.00 add to cart or Buy Direct from
Phillip J. Pirages Fine Books
Share this item