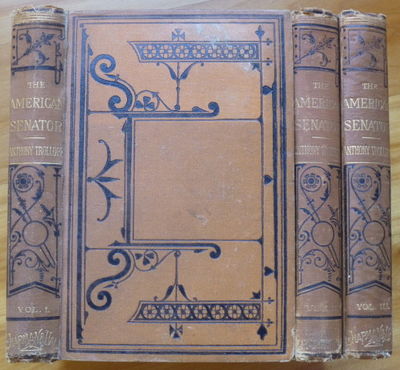 by Trollope, Anthony
1877. In Three Volumes. London: Chapman and Hall, 1877. Original pinkish-ochre cloth decorated in black. First Edition, published at the end of this novel's serialization in Temple Bar magazine. THE AMERICAN SENATOR will be read for the sake of its opening chapters, which set before the reader in a few pages the whole geographical and social pattern of an English county; for the sake of its hunting episodes, which are among the best not only in Trollope, but in the whole of English fiction; and for the sake of Arabella Trefoil, a masterly study of a girl without a heart... [Sadleir]. The name of the American senator who comes to England with Arabella and her mother? -- Elias Gotobed. This copy is in the primary binding of pinkish-ochre cloth decorated in black (Sadleir identifies five secondary and remainder bindings, including one three-volumes-in-one). This light cloth is extremely prone to soil, but this set has less than usual (a slightly paler patch at the top of each front cover indicates that this set, like most, initially went to a lending library). There is minor wear at the spine ends, and a bit of bubbling of Vol II's front cover cloth. The endpapers are appropriately yellow but are not the originals; each bears a relatively recent bookplate. In all, a very good set. Sadleir (TROLLOPE) 46. (Inventory #: 11402)
$1,250.00 add to cart or Buy Direct from
Sumner & Stillman
Share this item