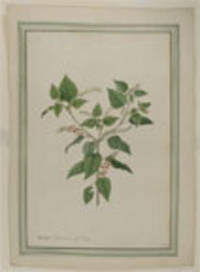 The distinctive lettering, wording, numbering and painted mount, as well as the exquisite handling of the botanical portrait itself indicate beyond reasonable doubt that this is the work of Georg Dionysius Ehret, the great 18th century German botanical artist, who lived and worked in England for the last 34 years of his life. This fine, accomplished watercolour drawing undoubtedly comes from his English years and is one of the rich trove of drawings that was collected in albums (hence the number in the lower right corner), and then later dispersed as the virtuoso aristocratic collectors of the era passed away. Created in a happy conjunction of scientific interest and aesthetic sensibility, Ehret's watercolours epitomize the hopeful and enlightened view of the period when it looked as though all the elements and workings of the world would soon be known and properly valued. Ehret's drawing of the Rouge plant exemplifies the characteristics that make his work so outstanding, which can be said to be simplicity itself, he was able to let the plant speak for itself, not as a specimen but as a particular plant who for the moment represents its species. The effect achieved is very close to musical, especially in this drawing.