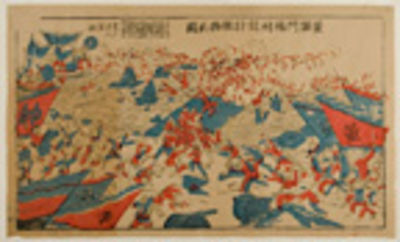 During the Boxer Uprising, one of the ways the Boxers spread their message throughout China was through widely circulated pictures known as nianhua, or "New Years' pictures." These pictures were often used to illustrate celebrations and festivals but also current events, such as military victories. Since there were many people in the countryside who were illiterate, the Boxers used various examples of imagery, including posters, placards, and flags, to coordinate the mass peasant movement and communicate their message of heroism and resistance against imperial powers. This print gives a close look at the battle at Yangcun. Chinese commanders, led by Dong Fuxiang and his Gansu Braves, were gathered in an encampment which the Western forces planned to attack. They built a bridge in order to cross the river to the encampment, but the Chinese had planted mines which caused the bridge to explode and the Western forces to retreat. The print shows the Chinese forces, waving swords as well as the flags of their commanders, surrounding the Western soldiers from many sides as they attempt to flee, some jumping off the bridge and drowning. "On the 14th day of the 7th month, the Western armies arrived at Yang village. Western officers ordered the foot soldiers to build a footbridge across the river to attack the encampment. They were hit by Commander-in-Chief Dong and General Lis secretly placed mines. Our armies attacked from different directions. The Western army was decisively defeated, and half of them were killed. A picture by the Daoist of Mount Song" (caption, translated by the National Archives). The celebratory nature of the illustration shows that it was meant to evoke feelings of patriotism and increase morale amongst the Chinese people and not intended to depict a realistic and historically accurate military scene. The pictorial style combines elements of traditional Chinese woodblock printing with some Western details, with the bright colors following the nianhua tradition of the colorful New Year pictures. The prominent red color splashed across the print draws attention to the fire and smoke, blood, and foreign uniforms.