Manual of the Corporation of the City of New York, for 1857.; (New Amsterdam Map!) 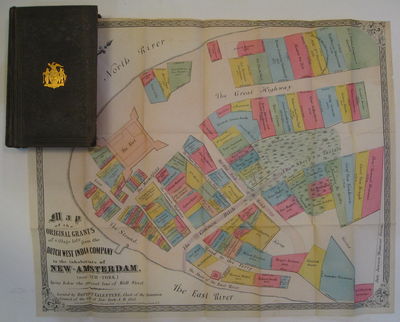 by VALENTINE, D. T. (David Thomas)
New York: Chas W. Baker, 1857. First. hardcover. very good(+). Illustrated manual of the Corporation of the City of New York. 581 pp. with 3 fold out maps and 33 diagrams and lithographed views. Cloth binding with official city seal in gold. 12mo. Stamp inside from New York Public Library (1896). Maps, illustrations and text in excellent condition. A newspaper cut out from 1909 with the article "Pictures of life in old New York" between page 238 and 239 have caused some toning on the pages. Maps and illustrations complete according to the "Index to the Illustrations in the Manuals of the Corporation of the City of New York", published by the Society of Iconophiles, 1906. D.T. Valentine, New York: 1857. The "Manuals of the Corporation" were directories of extensive historical and contemporary records of New York compiled by D.T. Valentine. These books include detailed information on the meetings of the Aldermen Council, ordinances passed, public officials, the city's debts, directories of hospitals, alms houses and schools, ferry schedules, lists of public porters, demographics and census information, and descriptions of historic buildings and streets. Much of the information was gleaned from Dutch and English sources, as processed by Valentine. Notable illustrations in this edition include "A View of City Hall, Park Theatre, Broadway & Chatham St. 1822", Equestrian statue of George Washington in Union Square, Remains of Fort Washington, "The old store House at Turtle Bay, 1852", Kings College, Old Reynold's Beer House, the residence of Peter Stuyvesant, and the Dining Room at Fraunce's Tavern. Maps include "Plan of the City of New-York and its environs" by John Hills, 1782, "Plan of the City of New York from the Original Copy published 1789" and "Map of the Original Grants of village lots from the Dutch West India Company to the inhabitants of New-Amsterdam...1857". D.T. Valentine (1801-1869) served as the Deputy to the Clerk of the Common Council for thirty-seven years without being promoted to Clerk. Valentine took it upon himself to compile the "Manuals", which he updated and published annually from 1841-1866. Many copies were personalized for prominent officials. This compendium is an excellent source of early New York City history. (Inventory #: 218955)
$850.00 add to cart or Buy Direct from
Argosy Book Store
Share this item