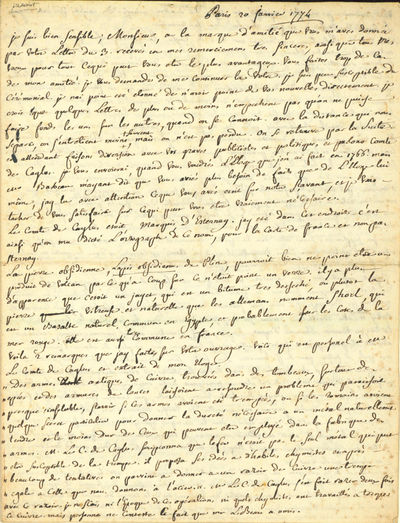 by Pasumot, Francois
Paris, 1774. Pasumot, François (1733-1804). Autograph letter signed, in French, to an unidentified correspondent. Paris, January 20, 1774. 4pp. 231 x 177 mm. Minor foxing, one or two tiny marginal tears, but fine otherwise. A long, densely written (ca. 1500 words) letter from French cartographic engineer and antiquarian François Pasumot, best known today as the co-creator, with Nicolas Desmarest (1725-1815), of the landmark geological "Map of a part of Auvergne, representing the lava flows, where basalt is found in prismatic and round forms . . . ," published as part of Desmarest's Mémoire sur l'origine et la nature du basalt en grandes colonnes polygones (Mémoires de l'Académie royale des sciences 1771 [1774]: 705-775). The Pasumot-Desmarest map "set a new standard for precise graphic representation of the positions of distinct kinds of rock, and played a role in emerging conceptions about geomorphological change and about the distribution of volcanic rocks" (Taylor, p. 129). Pasumot devoted much of his time to the study of archeology and ancient geography, which he became interested in after the discovery of several ancient monuments in the Auxerre region of Burgundy, where he was then teaching. He was the author of numerous works on antiquarian subjects, the most important being Recueil de mémoires géographiques sur quelques antiquités de la Gaule (1765), in which he determined the topography of the ancient towns of Chora, Bandritum and Gergovia as well as the location of several sections of Roman road. The present letter is representative of Pasumot's activities in this area: In it, Pasumot obliges his correspondent with several long extracts, taking up nearly two pages of the letter, from his then-unpublished "Eloge" to fellow antiquarian the Comte de Caylus (1692-1765), whose seven-volume Recueil d'antiquités égyptiennes, étruscanes, greques et romaines (1752-55) helped lay the groundwork for the development of modern methods of archeology and art history. Pasumot's letter ends with an "Extrait du testament de feu M. le Comte de Caylus: à Paris, le 15 juillet 1765" (Extract from the will of the late M. le Comte de Caylus, Paris, July 15, 1765), and a transcript of the inscription on Caylus's tomb, taken from the July 1769 number of the Journal des Scavants. Pasumot's "Eloge" to the Comte de Caylus, completed in 1766, remained in manuscript until after Pasumot's death, when it was included in the posthumous Dissertations et mémoires sur différens sujets d'antiquité et d'histoire (1810-13) edited by Grivaud de la Vincelle. Taylor, "New light on geological mapping in Auvernge during the eighteenth century: The Pasumot-Desmarest collaborabion," Revue d'histoire des sciences 47 (1994): 129-136. Nouvelle biographie générale. . (Inventory #: 41003)
$950.00 add to cart or Buy Direct from
Jeremy Norman & Co.
Share this item
Jeremy Norman & Co., Inc.
Offered by

Padua : Laurentio Pasquati , 1603
(click for more details about De venarum ostiolis. Tabula VIII in facsimile)
View all from this seller>