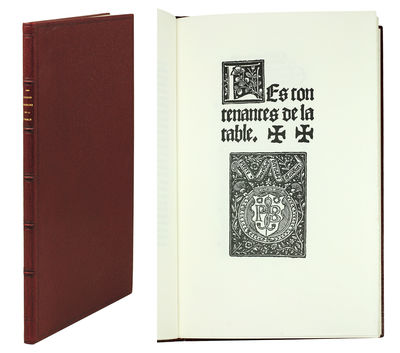 by Table Manners.
[Lyons, Pierre Mareschal & Bernabé Chaussard, ca. 1503: i.e Sebastopol and London: Ben Kinmont and Bernard Quaritch: 2006]. Small slim 8vo, 36, (1, colophon) pp. With the original text in fine facsimile within the pagination. Title printed in red and black. Full red morocco extra, cover with double blind fillet, 5 raised bands, backstrip lettered in gilt and with blind-filleted panels. New. § De luxe large paper edition of this superb facsimile, being the first edition in English, limited to 20 copies. 80 copies were also printed on small paper in a half red morocco and marbled boards edition at $500. "Issued a few decades after the invention of printing, this French rhymed treatise on table manners is a courtesy book addressed to children of humble as well as noble rank. It has been argued that this is the first printed book (apart from elementary Latin grammars) intended to be read specifically by children. The unknown author of Les Contenances offers his advice in the form of quatrains, each beginning 'Enfant...'"(Pierpont Morgan Library, Early Children's Books and their Illustration p. 32). Ben Kinmont and Bernard Quaritch write of the book's publication history: "Much sought after since the time of publication, a facsimile edition, limited to 35 copies - one printed on vellum - was published in 12mo by Bulmer and Co. for the Roxburghe Club in 1816. Another facsimile, limited to 20 copies, was published in Paris, ca. 1850, with a copy being offered in Pierre Berès's catalogue Nourritures of 1991 for Ff 8000. Baudrier XI 483 (listing a copy at Fribourg); Brunet II 244; Cat. Firmin Didot, 1879, 219; Vicaire 207-8; although ISTC provides several entries, the earliest there being described as "Lyons, Printer of the Champion des Dames, c. 1485-90", no certain sequence of editions -- none are dated -- has been established. A total of six copies -- none in the British Library -- of the various Paris and Lyons printings are recorded in ISTC: two at Chantilly, two at the Bibliothèque Nationale, Paris, one at the Bodleian Library, Oxford, and one at the Bayerische Staatsbibliothek, Munich; the only American location is Pierpont Morgan Library, New York (the only known copy of the first edition: see Fairfax Murray 106). (Inventory #: 102855)
$900.00 add to cart or Buy Direct from
John Windle, Bookseller
Share this item

The Living Talmud. The Wisdom of the Fathers and its Classical Commentaries. Selected and translated with an essay by Judah Goldin with drawings by Ben-Zion.

New York : The Spiral Press , 1957
(click for more details about The Living Talmud. The Wisdom of the Fathers and its Classical Commentaries. Selected and translated with an essay by Judah Goldin with drawings by Ben-Zion.)

New York : The Limited Editions Club , 1941
(click for more details about The Scarlet Letter.)
View all from this seller>