The Life, and Posthumous Writings of William Cowper, Esq. With an Introductory Letter to the Right Honourable Earl Cowper. 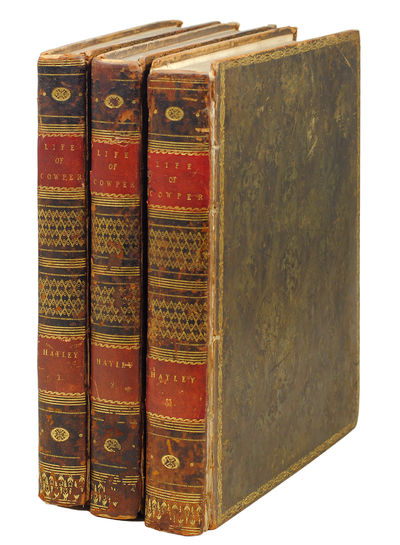 by Hayley, William. Blake, William (illustrator).
Chichester: Printed by J. Seagrave; for J. Johnson. 1803-1806. 4 vols. (including Supplementary Pages) in three, 4to, pp. [i-iii]-xii, not including (8) -- ‘Contents,’ bound after title-page, [1]-413; (8), [1]-422; (4), xxxi, [1]-416; (4), [1]-122, (24), with five plates and an engraving in the text by William Blake, second state of those in Vols. I and II (no second state for those in Vol. III), top cover of Vol. II with worm track, frontispiece to Vol. II slightly foxed, occasional browning in Vol. III and a worm track in the upper margin of the first few leaves, bound without half-titles, contemporary mottled calf, gilt borders to front and back covers, flat spines (not green) gilt in compartments with red lettering pieces in the second and fifth, a bit rubbed and worn, joints tender, the upper cover of Vol. III nearly detached; original blue silk bookmarks in all three vols., ownership inscription in each vol. of Charlotte Beatty, that in the third vol. dated 1805. Good. § First edition, and second state of the “Weatherhouse” plate, the only illustration in the book designed and engraved by Blake, of which only a few examples are known in the first state. This plate, here present in a very good impression with the imprint quite clear, is almost always in the second state; three or four copies are known in the first state. The other 5 plates are engraved by Blake after designs by others. Hayley’s position as the most respectable and considerable literary figure who had known Cowper made him the inevitable choice to write the definitive work. Blake was living with his wife at Felpham and she helped him make and print the engravings for their old friend and patron Hayley. Pencil inscription to front free endpaper reads: “These three volumes were obtained from the family of the Rev. Wm Bull of Newport Pagnell, Friend of Cowper and Newton [see DNB]. Charlotte Beatty was the original owner of the books and she was a friend of this circle, and also well-known in that area, where alms houses were named in her honour.”Keynes, Grolier, 124; Bentley 468A; Essick XLIV (note that the entry in Easson and Essick (IV) is totally superseded by Essick’s new research in the Commercial Book Illustrations). (Inventory #: 102866)
$1,250.00 add to cart or Buy Direct from
John Windle, Bookseller
Share this item

THE DEATH OF CHRISTOPHER MARLOWE by J. Leslie Hotson.