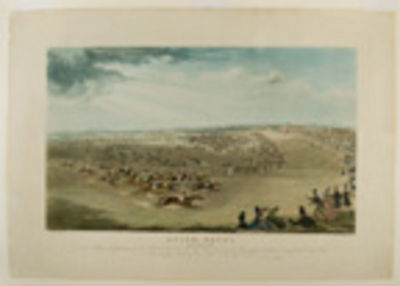 by POLLARD, After James (1792-1867)
London: S. & J. Fuller, 1834. Aquatints, printed in colours and finished by hand, by R.W. Smart and C. Hunt. A fine pair of images capturing the excitement of the start and final turn during the running of one of the five Classic English horse races

This sequence of plates depicting two moments in the Derby Stakes could hardly be more exciting. In Now They're Off , anticipation is over, the fierce, thundering movement has begun. In Here They Come, the final stretch is ahead. The horses appear to be moving more quickly than at the beginning. The cheering crowd is jammed against the inner railing, and spectators are riding madly to witness the finish.In fact, a number have fallen off their horses and are sailing through the air. It all takes place on a beautiful afternoon, sky is blue, there are hills in the distance. But all attention is riveted to horses and riders as they go all out for victory. James Pollard was the youngest son of the London engraver and print-seller Robert Pollard. He began work at the age of fifteen as a painter but quickly turned to engraving as well. In the 1820s his coaching scenes became both fashionable and lucrative. "A stream of coaching paintings followed, many of which he engraved himself. From 1821 he exhibited a small number of pictures at the Royal Academy and the British Institution which brought him more patrons. Between 1830 and 1840, Pollard also painted a number of racing pictures and some of the earliest scenes of steeple-chasing on purpose-made courses, many recording the prowess of the few professional and more amateur riders of the day... [In all his work Pollard took great pains over accuracy, this is particularly true of his large scale works and] it is Pollard's large racing scenes which really take off and into which one can gaze and discover a microcosm of the turf" (Charles Lane British Racing Prints p.146)