The Palace of St. Cloud on the side of the Orange Garden / Vue de Chateau de St. Cloud du coste de L'Orangerie 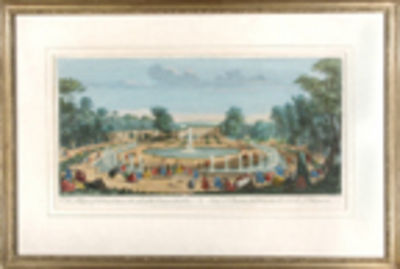 by RIGAUD, Jacques (1681-1754)
London: Printed and sold for Bowles & Carver, at their Map and Print Warehouse, No. 69 in St. Paul's Church Yard, 1755. Hand-coloured engraving. Printed on laid paper. In excellent condition. Framed in a handsome gold-leaf frame with a gold washline mount. Image size: 8 x 16 1/2 inches. A magnificent view of a water-fountain display in the gardens of St. Cloud Palace outside Paris, by the celebrated engraver Jacques Rigaud.

Towards the middle of the eighteenth century a market developed among English and European travelers and vicarious travelers for prints of the picturesque places in prominent countries. Sparked by a sense of national confidence and patriotism, artists and printmakers began to publish topographical prints of these important sights and architectural attractions. These prints in turn encouraged wider public recognition of and pride in the national treasures. Jacques Rigaud made a name for himself in both France and England as one of the most accomplished landscape engravers. He dedicated his artistic life to producing delicate prints of the beauty of his native land and executed a large series of works depicting France's stately homes. He also worked in England where he was commissioned to illustrate the celebrated gardens at Stowe. Rigaud's work influenced an entire generation of English and French printmakers; his delicate formal engravings established a classical format for topographical prints, which would be used until the nineteenth century. The magnificent St. Cloud palace was a summer residence for Napoleon I., Louis XVIII., Charles X., Louis Philippe and Napoleon III. Overlooking Paris, the Palace was famed for its magnificent gardens and grand water fountains, beautifully depicted in Rigaud's stunning print.