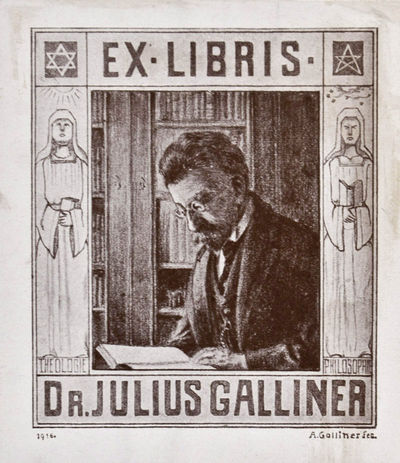 by Buber, Martin
Berlin: Im Schocken Verlag, 1936. First edition. Hardcover. vg. Octavo. 181, [1]pp. Original printed wrappers over brown cloth, with title-label laid on spine. Book preserved in its original publisher's paper covered slipcase. First edition of this fascinating work on Judaism and Jews, written and published in the Third Reich, 2 years before Martin Buber left definitively Germany and its Anti-Jewish persecutions. Slipcase age-toned. Minor age wear on dust-jacket with spine slightly sunned, and minor and sporadic tiny chipping along edges. Text in German. Slipcase in overall good, dust-jacket in very good, binding and interior in fine condition. *Julius Galliner was born on February 3, 1872 in Zinten (East Prussia, now Kornevo, Russia). He was the son of Jonas Galiner and Lina Pianikowski and had two older siblings, Max and Dorothea. At 11 years old Julius Galliner went to Königsberg (now Kaliningrad, Russia) and attended the lower levels of the secondary school (Gymnasium) there. He then entered the Jewish Teaching Seminary of Berlin, and became a teacher and cantor in Schwerin. There he was supported by the rabbi Gabriel Fabian Feilchenfeld and continued his secondary studies. After passing his exams, Galliner went to Berlin, where he attended the Hochschule für die Wissenschaft des Judentums and the University of Berlin. He received his doctorate in 1897. At first Galliner worked as a religion teacher and leader of a religious school in Charlottenburg for the Jewish Community of Berlin, working simultaneously as a rabbi at the synagogues in Charlottenburg. He would continue to work as a rabbi for the next 46 years, preaching in the synagogues on Fasanenstraße and Prinzregentenstraße. In 1917 he became a rabbi for the greater Berlin community. In addition to his teaching, Galliner represented educational interests as a member of the board of education in Charlottenburg, the Talmud-Thora board of the Jewish Community in Berlin, and as the head of his school leadership as well as of the regional rabbinate. He also helped to found the Teachers' Educational Institute (Lehrer-Bildungsanstalt) of the Prussian Union (Preussischen Landesverband). His social work included working with the Hilfsverein für Jüdische Studierende. In 1903 Julius Galliner married Elisabeth Zerline Kristeller, the daughter of Benjamin (Benno) and Clara Kristeller. Galliner emigrated to England in March 1939 before moving to New York City to be with his two children. He died there on September 7, 1949. (Inventory #: 26016)
$100.00 add to cart or Buy Direct from
Eric Chaim Kline Bookseller
Share this item