MAGNA ANGLIAE NOTITIA: or, the Present State of Great Britain; with diverse Remarks upon the Ancient State thereof. The Thirty-third edition of the South Part, called England; and the Twelfth of the North Part, called Scotland. To which is added... 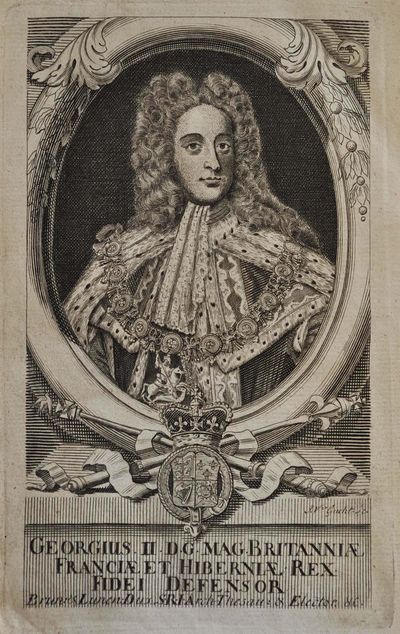 by Chamberlayne, John
London: Printed for D. Midwinter, B. Motte et al, 1737. Book. Very good- condition. Hardcover. Early edition. Octavo (8vo). [xiv], 443 pages of text, followed by 274 pages (List of all the Offices...), followed by 67 pages (List...Part II). Illustrated by an engraved frontis or George II. Previous owner's notations on a front endpaper. Original full leather binding is quite worn, with heavy rubbing to spine including chipping, and several scuffs, tears and wrinkling to leather boards; remains intact and functional. Title continues "...A Compleat List of the Queen's Household; as also those of their Royal Highnesses the Prince and Princess of Wales, the Duke of Cumberland; their Highnesses the Princess Emelia, the Princess Carolina, the Princess Mary, and Princess Louisa. In Two Parts. With His Majesty's Royal Privilege." The second section is titled "A General List, or Catalogue, of all the Offices and Officers Employed In the several Branches of his Majesty's Government Ecclesiastical, Civil, Military, &c. I. In South-Britain, or England. II. In North-Britain, or Scotland. And The Subordinate Offices and Officers, placed under the Grand Offices, to whose Direction and Disposal they immediately appertain." The third section is titled "A List of all the Offices and Officers in North-Britain, or Scotland. Part II.". (Inventory #: 012625)
$150.00 add to cart or Buy Direct from
Kurt Gippert Bookseller
Share this item
Kurt Gippert Bookseller
Offered by