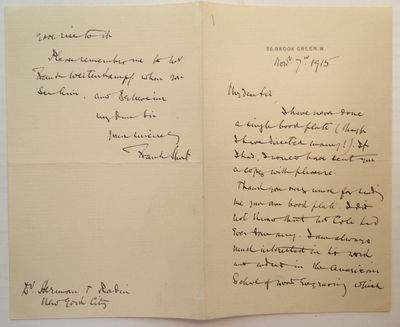 by SHORT, Frank (1857 - 1945)
Brook Green, 1915. unbound. 2 pages each measuring 7.25 x 4.5 inches, Brook Green, November 7, 1915, This fine-content letter was written to Dr. Hermann Radin concerning the engraving of bookplates, in part: "...I have now done a tiny bookplate (though I have directed many)...I did not know that Wm. Cole had ever done any. I am always much interested in his work and what is the American School of Engraving - which gave rise to it." One horizontal fold; very good(+) condition. English etcher, mezzotint artist, and engraver who holds the distinction of having his work displayed in every art museum in the world. William Cole was one of the greatest engravers of the late 19th and early 20th centuries. (Inventory #: 215998)
$250.00 add to cart or Buy Direct from
Argosy Book Store
Share this item

La Maison de mon Village [The House of my Village]

Monte Carlo : Andre Sauret , 1960
(click for more details about La Baie des Anges [The Bay of Angels])
View all from this seller>