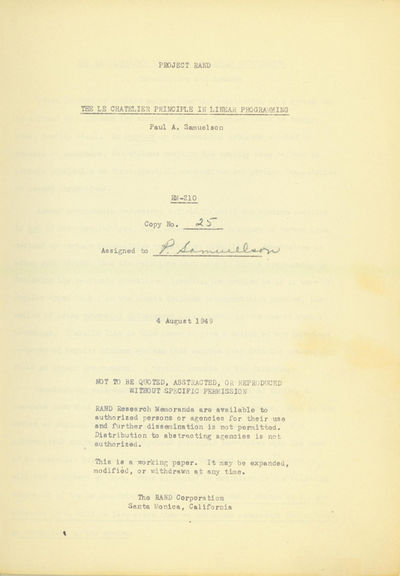 by Samuelson, Paul A.
Santa Monica, CA: RAND Corporation, 1949. Samuelson, Paul Anthony (1915-2009). The Le Chatelier principle in linear programming. U.S. Air Force Project RAND report RM-210. Offset typescript. 18ff. Santa Monica, CA: The RAND Corporation, 4 August 1949. 280 x 217 mm. Original printed wrappers with author and title of paper supplied in original typescript, three or four small marginal tears, but fine otherwise. Samuelson's copy, no. 25 of most likely 50 copies or fewer, assigned to Samuelson on the title in a secretarial hand. First Edition, the Author's Own Copy, of this rare and important research memorandum, in which Samuelson first applied the Le Chatelier principle of thermodynamics-which he had introduced into economics two years before-to the field of linear programming. Extremely Rare, with only one copy (Duke University) cited in OCLC. This working paper, prepared under the auspices of Project RAND (later the RAND Corporation), was most likely issued in an edition of 50 copies or fewer; a note on the title reads that "RAND Research Memoranda are available to authorized persons or agencies for their use and further dissemination is not permitted." Paul Anthony Samuelson, the first American to receive the Nobel Prize in Economics, has often been called "the father of modern economics" due to the fact that he, more than anyone else, was responsible for incorporating the use of mathematics and the principles of optimization that characterize the modern paradigm of economic analysis. In his magnum opus, The Foundations of Economic Analysis (1947), Samuelson established the method of "comparative statics" by adapting the Le Châtelier principle of thermodynamics, in order to solve the fundamental problem of explaining how the coordinates of an equilibrium point defined by a system of equations shift when one or more of the given determining parameters changes. Le Châtelier's principle can loosely be formulated in the following way: "If the external conditions of a thermodynamic system are altered, the equilibrium of the system will tend to move in such a direction as to oppose the change in external conditions." In the context of economics this principle yields itself as the property that if the quantity of one of the available resources changes, then its shadow price changes in the opposite direction, or in other words, the marginal value of a resource increases if its amount is reduced, and vice versa. Samuelson's method of comparative statics lies at the core of modern economic analysis. In this research paper Samuelson first introduced his principle, which later became known as the Samuelson-Le Châtelier (or correspondence) principle, into the newly born field of linear programming, which is a mathematical method for determining a way to achieve the best outcome in a given mathematical model. The method was first developed in 1939 by Russian mathematician Leonid Kantorovich, and further expanded in the following decade by George Dantzig, who published the simplex method in 1947, and John von Neumann, who developed the theory of the duality in the same year. Linear programming is used most often in business, economics and operations research. Samuelson published numerous works on linear programming, culminating with Linear Programming and Economic Analysis (1958), co-authored with Robert Dorfman and Robert Solow. . (Inventory #: 41018)
$3,750.00 add to cart or Buy Direct from
Jeremy Norman & Co.
Share this item
Jeremy Norman & Co., Inc.
Offered by