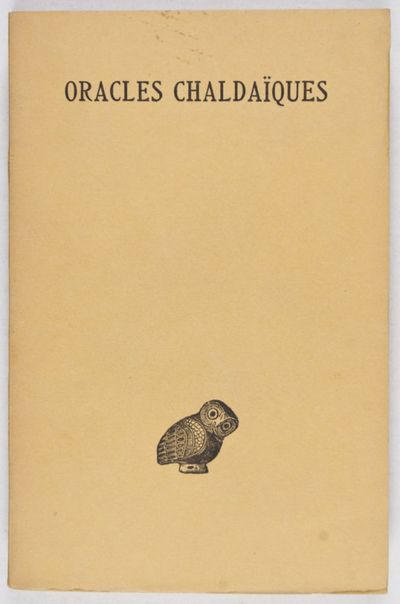 by Edouard des Places, S. J. (Texte établi et traduit par)
Paris: Société d'Edition "Les Belles Lettres, 1971. Softcover. g. Quarto. 252, [2]pp. Original printed wrappers with black lettering on front cover and spine, and printer's device on front and back cover. Printer's device on title-page. Fascinating work beeing an edition of the Greek text of the Chaldean Oracles and of Proclus' Commentary. Minor age-toning on spine. Numerous pen underlining throughout. Text in French and Greek. Wrappers and interior in overall good+ condition. The Chaldean Oracles have survived as fragmentary texts from the 2nd century AD, and consist mainly of Hellenistic commentary on a single mystery-poem (which may have been compilations from several oracular sources, considering the random subject changes) that was believed to have originated in Chaldea (Babylonia). They appear to be a syncretic combination of Neoplatonic elements with others that were Persian or Babylonian in origin. Later Neoplatonists, such as Proclus and Iamblichus, rated them highly. The 4th-century Emperor Julian suggests in his Hymn to the Magna Mater that he was an initiate of the God of the Seven Rays, and was an adept of its teachings. When Christian Church Fathers or other Late Antiquity writers credit "the Chaldeans", they are probably referring to this tradition. An analysis of the Chaldean Oracles demonstrates a similarity with contemporary gnostic teachings: fiery emanations initiate from the transcendental First Paternal Intellect, from whom the Second Intellect, the Demiurge comprehends the cosmos as well as himself. Within the First Intellect, a female Power, designated Hecate, is, like Sophia, the mediating World-Soul. At the base of all lies created Matter, made by the Demiurgic Intellect. The matter farthest from the Highest God (First Father/ Intellect) was considered a dense shell from which the enlightened soul must emerge, shedding its bodily garments. A combination of ascetic conduct and correct ritual are recommended to free the soul from the confines of matter and limitations, and to defend it against the demonic powers lurking in some of the realms between Gods and mortals. (Inventory #: 26289)
$50.00 add to cart or Buy Direct from
Eric Chaim Kline Bookseller
Share this item