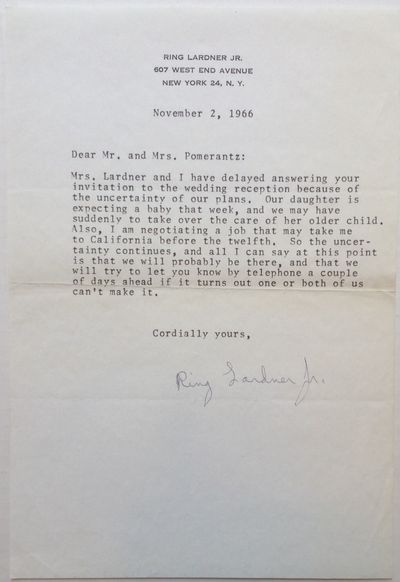 by LARDNER, Ring, Jr. (1915 - 2000)
New York, 1966. unbound. 1 page, 9 x 6.25 inches, New York, November 2, 1966. Written to his longtime friend and attorney Abraham Pomerantz, in part: "...in answering your invitation to the wedding reception...our daughter is expecting a baby next week, and we have suddenly to take over the care of her older child. Also, I am negotiating a job that may take me to California...so the uncertainty continues, and all I can say at this point is that we will probably be there, and that we will try to let you know by telephone a couple of days ahead if it turns out one or both of us can't make it..." Gentle yellowing along one of the horizontal folds; still very good condition. When this letter was written, Lardner had barely returned to Hollywood after being blacklisted for 18 years. Abe Pomerantz was an American lawyer considered by many to be the "dean of the class action suit." He later was U.S. Deputy Chief Counsel prosecuting Nazi war criminals at the Nuremberg Trials. (Inventory #: 219991)
$125.00 add to cart or Buy Direct from
Argosy Book Store
Share this item

A General Chart Exhibiting the Discoveries made by Capt. James Cook in this and his two preceeding Voyages with the Tracks of the ships under his Command

London : William Faden , 1797
(click for more details about A General Chart Exhibiting the Discoveries made by Capt. James Cook in this and his two preceeding Voyages with the Tracks of the ships under his Command)

A Chart of the Antilles or, Charibbee or, Caribs Islands, with the Virgin Isles

London : W. Faden , 1784
(click for more details about A Chart of the Antilles or, Charibbee or, Caribs Islands, with the Virgin Isles)
View all from this seller>