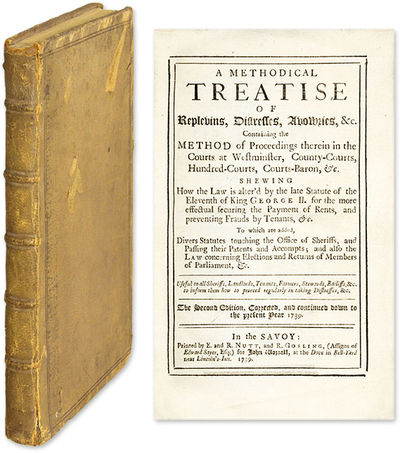 by Replevin
1739. London, 1739. 2d & last ed.. London, 1739. 2d & last ed. The Law of Replevin in the Early Eighteenth Century [Replevin]. A Methodical Treatise of Replevins, Distresses, Avowries , &c., Containing the Method of Proceedings Therein in the Courts at Westminster, County-Courts, Hundred-Courts, Courts-Baron, &c., Shewing How the Law is Alter'd by the Late Statute of the Eleventh of King George II. For the More Effectual Securing the Payment of Rents, And Preventing Frauds by Tenants, &c. To Which are Added, Divers Statutes Touching the Office of Sheriffs, And Passing Their Patents and Accompts; And Also the Law Concerning Elections and Returns of Members of Parliament, &c. Useful to All Sheriffs, Landlords, Tenants, Farmers, Stewards, Bailiffs, &c. To Inform Them How to Proceed Regularly in Taking Distresses, &c. Corrected, And Continued Down to the Present Year. [London] Printed by E. and R. Nutt, And R. Gosling, (Assigns of E. Sayer, Esq.) for J. Worrall, 1739. viii, 164 [7] pp. Octavo (8" x 5"). Contemporary sheep, blind rules to boards, blind filets to joints, raised bands and lettering piece to spine. Some rubbing to extremities, a few shallow scuffs to boards, joints just starting at ends, corners bumped and somewhat worn, hinges cracked but secure, front endleaves and upper portion of rear free endpaper lacking, rear pastedown loose, text notably fresh. $500. * Second and final edition. The author claims to have treated "Replevins in a more particular and methodical Manner than hitherto has been done" (1). A well-arranged treatise, it offers an excellent overview of this legal area as it existed in the first half of the eighteenth century. OCLC locates 9 copies in North American Law Libraries. This edition not in Sweet & Maxwell. English Short-Title Catalogue T123428. (Inventory #: 57345)
$500.00 add to cart or Buy Direct from
Lawbook Exchange
Share this item

A Treatise of the Pleas of the Crown; Or, A System of the Principal..

1724
(click for more details about A Treatise of the Pleas of the Crown; Or, A System of the Principal..)