Between the Hammer and the Sickle: Baltic Jewry under Soviet Rule During World War II. A Volume of Collected Articles 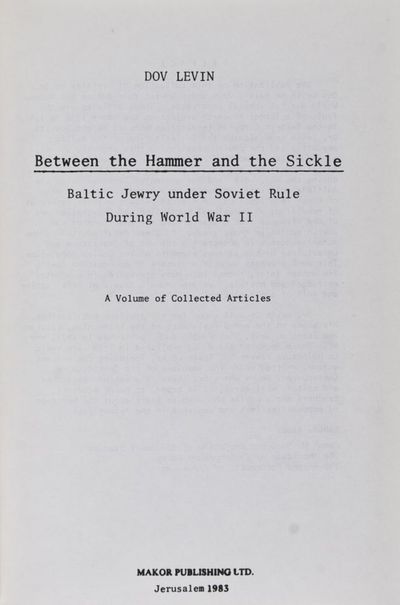 by Levin, Dov
Jerusalem: Makor Publishing, 1983. Hardcover. g. 4to. 506pp. Blue leather with gold lettering on covers and spine. "The publication of this collection of articles by Dr. Dov Levin on Baltic Jews under Soviet rule during the Second World War has special importance. These articles are the fruit of a larger research project on the years 1939 to 1941 in the Eastern European territories annexed by the Soviets. Dr. Levin investigated the Sovietization of the Baltic republics and the Jewish reaction to this process, as well as the entire network of relationships between Jews of the Baltic countries, the local inhabitants and the Soviets during the war. His findings presented here deal with the multiple political, economic, social and cultural aspects of these relationships..." Preface and introduction in English, main text in Hebrew. Some staining and scuffing on boards. Head and tail of spine and corners bumped. Small area on fore-edge of front and back board bumped. Stamp of previous owner on front flyleaf and bottom margin of introduction page. Binding in good, interior in very good condition. (Inventory #: 26437)
$95.00 add to cart or Buy Direct from
Eric Chaim Kline Bookseller
Share this item