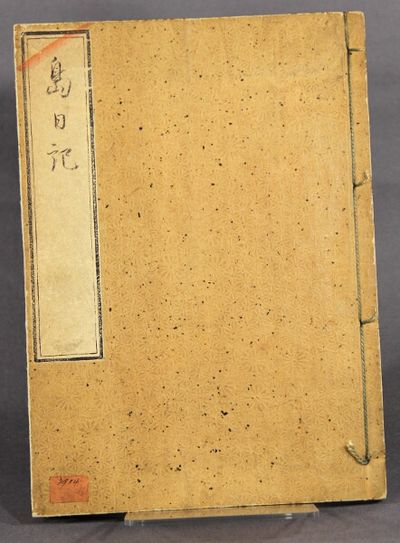 by Kodera Osai
Japan, 1796. Large fukurotoji, 10.5" x 7.5", pp. [108]; old Japanese "grass" script with Chinese elements, 18 extraordinary double-page watercolor illustrations; sewn and bound in the oriental style (fukurotoji) in original speckled beige wrappers; very slightly worn, preserving the original manuscript label label; a very good, attractive example, beautifully illustrated. An account of a voyage through the Izu Islands, a chain of islands south of Tokyo Bay, including Hachijojima, Hidojima, Arajima, Ooshima, and Miyakejima. Apparently one of three volumes, but this trip is complete unto itself. Apparently this voyage came as the result of an order from the Kansei Shogunate. During this period there were a number of people who traveled at the government's request to record geographical and cultural observations all over Japan, including Ino Tadataka who is known for completing the first map of Japan. Among these travelers was a local magistrate by the name of "Ochu" ("Taichu") who lead an expedition in 1796 to the Izu Islands. With him was the artist Kodera Osai, and it is his art work that graces this spectacular manuscript. The textual account of the voyage, dated April to December, 1796, is also likely his. In it he records excursions to temples (on the island of Hachijo he used the Soufukuji Temple as lodging), recounts his experiences with the local cuisines (he's a fan of sake), takes note of the silk and weaving industry, and records incidents of family life (in one particular household he notes that there were 14 to 15 children, all of whom were hungry). He describes the flora and fauna (but not in scientific terms) and tells of fish, sea turtles, frogs, etc., as well as the local agriculture, mountains, and bamboo forests. He also has an interesting account of a family trying to fix their roof, and mentions that he can see Mt. Fuji in the distance across the sea. He also tells of the costume of the island inhabitants, how they fix their hair, how the women occupy themselves during the day and how they take care of their husbands at night. On the return voyage a storm was encountered and Kodera recounts the rough trip back. The illustrations include a wonderful cartographic illustration of Hachijo, the first island he visited, showing the topography, the villages, trees, a path, etc.; 2 botanical illustrations; 3 illustrations of fish; 3 illustrations of villages showing inhabitants at work and play; a rock lobster; a sea turtle being pulled and prodded ashore by nearly naked natives; two native women (one bare-breasted) before a mirror, as well as other general scenes of the islands and the inhabitants. (Inventory #: 32761)
$10,925.00 add to cart or Buy Direct from
rulon-miller books
Share this item