STRICTURES ON THE REV. MR. THATCHER'S PAMPHLET ENTITLED, OBSERVATIONS UPON THE STATE OF THE CLERGY OF NEW-ENGLAND: WITH STRICTURES UPON THE POWER OF DISMISSING THEM, USURPED BY SOME CHURCHES. BY J.S. - A LAYMAN 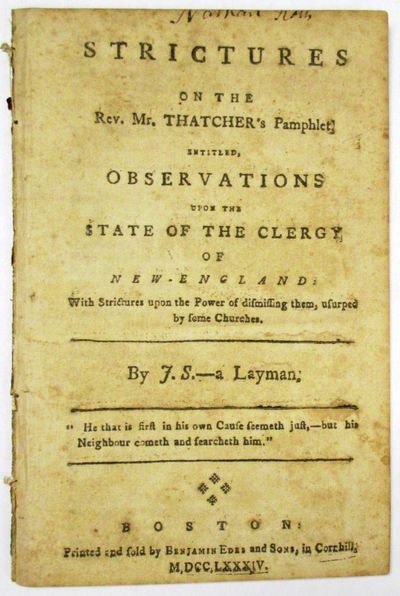 The author, whom Evans identifies, would become a loyal Jeffersonian and serve as Governor and Attorney General of Massachusetts. His writings "on contemporary issues, published under several pen names, were innumerable and carried great weight. He was more than a mere politician, however, and was keenly interested in several fields of thought outside of politics" [DAB].
This pamphlet, Sullivan's earliest separate publication, is an unambiguous anti-clerical celebration: the people of New England have finally abandoned the "servile awe" in which they previously held the clergy. Thatcher had lamented the diminishing power of the clergy. Sullivan rebuts Thatcher's complaint that churches should not have the power to dismiss their pastors. Thatcher also holds to the increasingly unpopular view that towns ought to support local ministers, even while the people are "suffering themselves by being obliged to receive their own debts in paper money upon a par."
Originally, "none but members in full communion with the congregational churches, had a right to vote in the affairs of civil government." Happily, this state of affairs has ended. Sullivan reminds that, at the time of the Revolution, "some clergymen in the state were enemies to the people, who can never plead the excuse of timidity, for they gave evidence of a malignancy of heart...They can never be forgiven."
Evans 18800. NAIP w003582. (Inventory #: 26782)
$750.00 add to cart or Buy Direct from
David M. Lesser, Fine Antiquarian
Share this item
David M. Lesser, Fine Antiquarian Books LLC
Offered by

Burlington, New-Jersey : Printed and Sold by Isaac Collins , 1774
(click for more details about THE HISTORY OF THE RISE, INCREASE AND PROGRESS, OF THE CHRISTIAN PEOPLE CALLED QUAKERS; WITH SEVERAL REMARKABLE OCCURRENCES INTERMIXED. WRITTEN ORIGINALLY IN LOW-DUTCH, AND ALSO TRANSLATED INTO ENGLISH. THE THIRD EDITION, CORRECTED)

VIVE LE CLAY! A NEW WHIG SONG WRITTEN & DEDICATED TO THE WHIGS OF THE UNITED STATES BY SETH H. SWEETZER

Baltimore : Published by F.D. Benteen , 1844
(click for more details about VIVE LE CLAY! A NEW WHIG SONG WRITTEN & DEDICATED TO THE WHIGS OF THE UNITED STATES BY SETH H. SWEETZER)
View all from this seller>