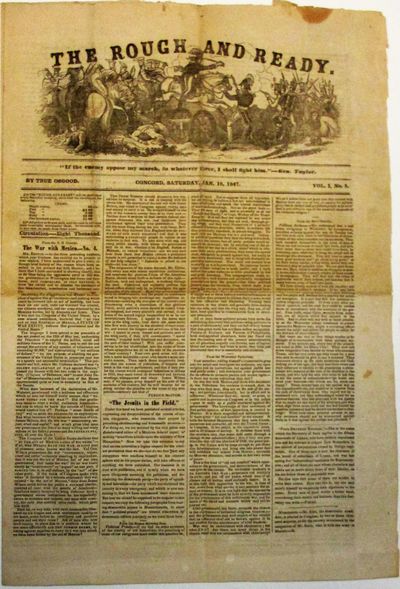 by Osgood, True
Concord, 1847. Folio, folded to 4pp, printed in four columns per page. Cut of General Taylor in the midst of a battle, with the legend, "If the enemy oppose my march, in whatever force, I shall fight him." Some old folds and a couple of small holes affecting a couple of letters, else Very Good.

'The Rough and Ready,' a short-lived periodical, supported the Mexican War and denounced the "treasonable" conduct of the opposition. Despite its title, a respectful term referring to the Whig General and future President Zachary Taylor, it was a Democratic and anti-Whig organ. Indeed, it has harsh words for Taylor: "HE FURNISHES CREOLE VIRGINS FOR THE 'HELLS' OF NEW ORLEANS."
The "Principles of the Federal Party," i.e., the Whigs, would "go for a dissolution of the Union if slavery be not abolished." 'The Rough and Ready' charges that the Whigs have a "negro in their service"-- one "Milton Clarke, a fugitive slave"-- for the upcoming campaign.
Hammond, Bibliography of the Newspapers and Periodicals of Concord, N.H. page 28. (Inventory #: 26979)
$350.00 add to cart or Buy Direct from
David M. Lesser, Fine Antiquarian
Share this item
David M. Lesser, Fine Antiquarian Books LLC
Offered by