The Protocols: Myth and History 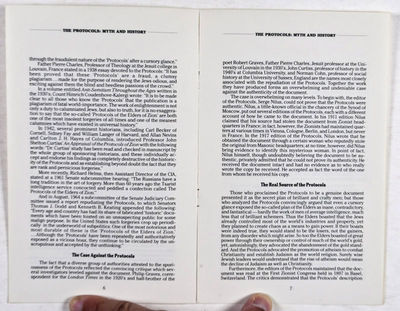 by Anti-Defamation League of B'Nai B'Rith
NP, 1981. vg. 8vo. 14pp. Original stapled printed paper covers, as issued. Fascinating look at the Protocols of the Learned Elders of Zion. "The document known as the Protocols of the Learned Elders of Zion, said to be secret plans of Jewish leaders for the attainment of world domination, is, in fact, the most famous and vicious forgery of modern times. Though discredited, the Protocols have succeeded time and time again in stirring up hatred and racism in the twentieth century." Sunning to outer edges of back cover. Overall very good condition. (Inventory #: 26572)
$45.00 add to cart or Buy Direct from
Eric Chaim Kline Bookseller
Share this item