[A series of 12 British Acts of Parliament concerning whaling, mostly in Greenland and the Davis Strait] 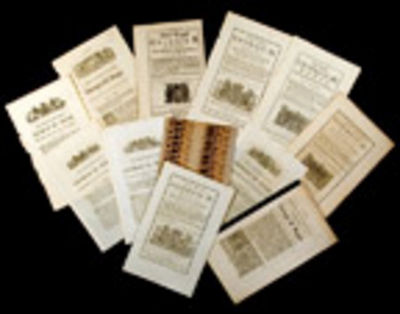 by [GREENLAND WHALE FISHERY, British Acts of Parliament]
London: John Baskett [and others], printers, 1818. 12 works, folio. (12 1/2 x 8 inches, and smaller). Disbound or stitched A fascinating series spanning the whole of the period when whaling was carried out on a successful commercial basis in the waters off Greenland. After an abortive start by the South Sea Company between 1724 and 1732, the British whaling fleet operated off Greenland and the Davis Strait throughout the remainder of the 18th century, with increasing success due to a large degree to the succession of bounties granted to ship owners by the British Government. The present selection of acts of parliament includes a number concerning the bounty: the first, dated 16th January 1732 makes law "that a Bounty [will] be paid on the Return of every Ship [of 200 tons and over] imployed by His Majesty's Subjects in the Whale Fishery". For the bounty to be paid, certain stringent criteria had to be met; these increased as the century progressed. By the time of the last Act in the present group (March 1818) the Greenland whalers were reporting declining catches and were already beginning to turn their attention to other whaling grounds, i.e. largely in the Pacific and Antarctic. This group offers and interesting series of snapshots of the industry during its most productive century. The acts comprise: 1. An Act for encouraging the Greenland Fishery. 1732. Stitched, later wrappers. Exemption from duty extended for a nine year period. 2. An Act for the further Encouragment of the Whale Fishery carried on by His Majesty's British Subjects. 1733. Stitched, later wrappers. The introduction of a bounty for ships over 200 tons. 3. An Act for continuing the several Laws therein mentioned ... [including] granting a further Bounty for all Ships employed in the Whale Fishery during the present War; for exempting Harponers and others ... from being impressed... [No date but circa 1750]. Spine reinforced. The bounty raised by a third, other measures to help the trade. 4. An Act for granting a additional Bounty on Ships employed in the Greenland and Whale Fishery, for a limited time. [No adte but circa 1761]. Disbound. The increased bounty confirmed for another five years. 5.An Act for further continuing several Acts ... for the Encouragement of the Whale Fishery.. 1768. Stitched. 6. An Act for the better Support and Establishment of the Greenland and Whale Fishery. 1771. Stitched. The rules about the amount of bounty to be paid has changed, with additional laws concerning vessels of American origin, exemption from duty extended to include the Gulf of St. Lawrence, certain members of a whaler's crew to be exempt from being pressed into service in the Royal Navy, etc. 7.An Act to explain and amend Two Acts made ... with respect to the Limits of the Greenland Seas and Davis's Streights ... and to enlarge the Time for the Return of the Vessels employed in the Whale Fisheries. 1780. Stitched. 8. An Act for granting an additional Bounty on Ships employed in the Greenland and Whale Fishery, for a limited Time. 1782. Disbound. The bounty retained for a further five years. 9. An Act for allowing Vessels employed in the Greenland Whale Fishery, to complete their full Number of Men at certain Ports, for the Present Season. 1805. Spine strengthened. Whaling ships permitted to call in to ports in Scotland, the Orkneys and the Shetland Islands to find men to complete their crews. 10. An Act for allowing, until the Signature of Preliminary Articles of Peace, Vessels ... to complete their full Number of Men at certain ports. 1806. Spine strenghtened. An extension of the previous act. 11. An Act to revive and continue [for five years] several Laws... 1815. Strengthened spine. Several prvious acts re-confirmed. 12. An Act to amend an Act ... so far as it relates to the Oaths thereby required... 1818. Unbound. Concerns the oaths required from owners/captains before the bounty due would be released to them. (Inventory #: 24993)
$950.00 add to cart or Buy Direct from
Donald A. Heald Rare Books
Share this item
Donald A. Heald Rare Books
Offered by