Poems By Dobson, Locker and Praed, with Fac-Similes of Water-Color Paintings By Maud Humphrey, Together with Illustrations in Black-And-white By Various Artists 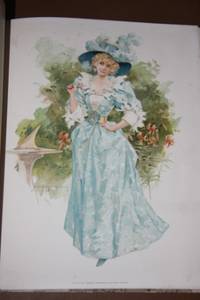 by Dobson, Austin; Praed, Withrop M.; Locker, Frederick
New York: Frederick A. Stokes Company, 1892. First Editiion. Hardcover. Good Plus. Humphrey, Maud, Etc.. 4to. 71 pp, with six full page color plates after Maud Humphrey's work, depicting lovely young women in eighteenth century period dress. Humphrey was best known, of course, for her cutesy depiction of children and for being the mother of Humprey Bogart. Dobson, the best known of the poets represented, was a very popular poet of the time who wrote copiously about the eighteenth century, which he glorified for its propriety, its aesthetic perfection, its manners, its pre-Industrial Age order and halcyon settings. His poems are fluid and lilting, but his reputation was dealt a severe blow from which it has never fully recovered by the mockery of the modernist eccentric poet, Edith Sitwell. Anyway, it is the Humphrey plates that are for most the primary interest in this book. This copy is fair to good. The decorated cover, with buckram spine laid over a floral print on the boards, is very soiled. The gilt print on the spine and buckram of the front board is still clear. There is a pencil poke and some old handwriting on the buckram, mostly in the back. However, the pages and the plates are entirely clean. New and clean endpapers. (Inventory #: 000802)
$125.00 add to cart Available from
White Fox Rare Books & Antiques
Share this item
White Fox Rare Books and Antiques
Offered by