Q: THE AUTOBIOGRAPHY OF QUINCY JONES 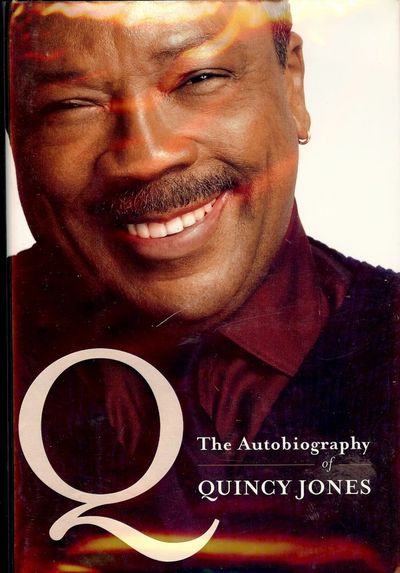 by JONES, Quincy
2001. JONES, Quincy. Q: THE AUTOBIOGRAPHY OF QUINCY JONES. NY: Doubleday, [2001]. Small quarto, cloth & boards in dust jacket. First Edition, fourth printing. Signed presentation from Jones to Russell and Kimora Lee Simmons, creators of Phat Fashions. Jones has penned "Kimora & Russell" on the front endpaper and then drawn a heart. On the half-title page he has also written: "To my beloved baby- bro & sis & Ming Lee- Wish A Cool Year to yawl! With love & big time props- Many (mo) blessings in 2002 [he then draws a smiley face and another heart], Quincy. 12/31/01." Obviously inscribed at a New Year's Eve function. Kimora, a fashion model, and Russell Simmons have both been executives in their company, Phat Fashions. Kimora was also the subject of a television reality show in 2007 and a judge on the first season of television's "America's Next Top Model." Their first child, Ming Lee, was born in January, 2000. While books signed by Jones are not uncommon, nice association copies are!!! Fine; minor wear d/j. $125.00. (Inventory #: 1933)
$125.00 add to cart or Buy Direct from Antic Hay Books
Share this item
Antic Hay Books
Offered by

by ALBAUGH III, William A.

Washington, DC : The Journal of the American Ordnance Association , 1952
(click for more details about CONFEDERATE HANDGUNS: A COLLECTOR'S DETAILED STUDY OF SOUTHERN PISTOLS)

THE CAMPAIGN FROM TEXAS TO MARYLAND WITH THE BATTLE OF FREDERICKSBURG

by DAVIS, Rev. Nicholas A.

Austin, Texas : The Steck Company , 1961
(click for more details about THE CAMPAIGN FROM TEXAS TO MARYLAND WITH THE BATTLE OF FREDERICKSBURG)
View all from this seller>