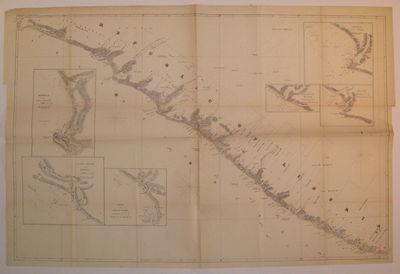 by LYNCH, William Francis
Washington DC, 1853. unbound. very good. Case map. Uncolored lithograph. Image measures 27.25" x 41 5/8". Rare map of the coast of Liberia that reflects the country's history. Includes several insets of the major rivers in the area: Monrovia and Cape Mesurado, Junk River and Marshall, Edina and Grand Bassa, Ceston, Sangwin River and Sinou. Details include geographical features, depths and prevailing winds. The map denotes specific plots of land and when they were "acquired", from 1822 to 1849. The American Colonization Society first founded the region in the early 1820s for freed slaves as an alternative to emancipation within the United States. In 1847 the Americo-Liberian settlers declared independence and established the Republic of Liberia. This map, published only six years later, is a contemporary tribute to Liberia's development. Booklet missing. Wear along original folds, tear to right edge. (Inventory #: 220277)
$850.00 add to cart or Buy Direct from
Argosy Book Store
Share this item